Home Prize Pool Up to $800,000 as Phil Hellmuth, Tom Dwan to Face Off Again in High Stakes Duel 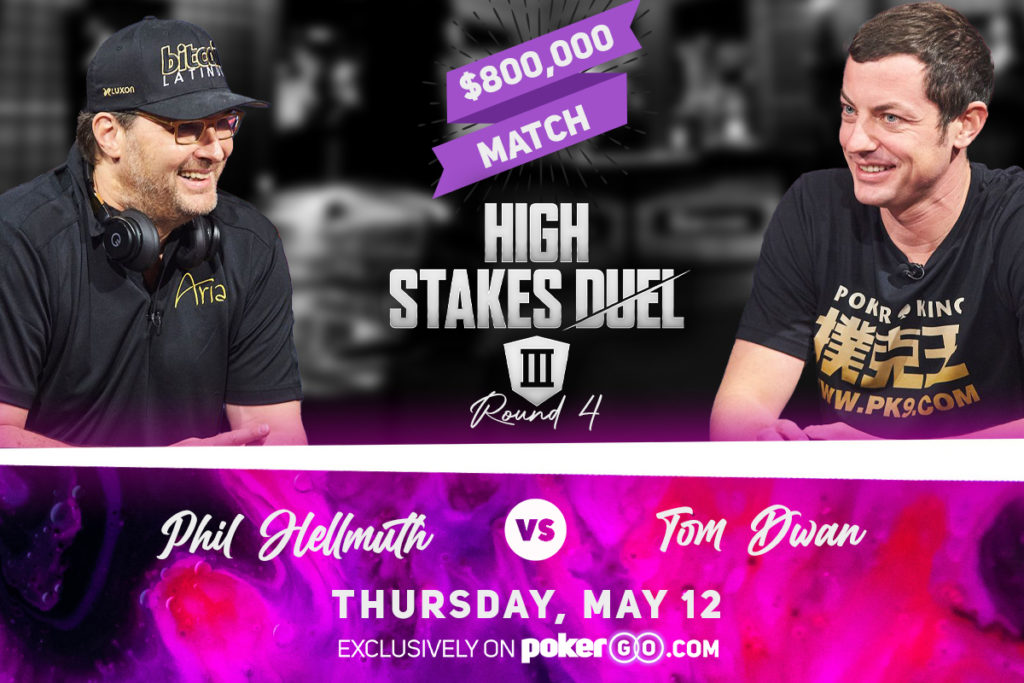 Stakes have doubled once again

Phil Hellmuth and Tom Dwan are going for yet another rematch, as they are set to square off in High Stakes Duel III Round 4 on May 12. Each man is putting $400,000 at stake, the highest level the heads-up battle has ever reached.

PokerGO will broadcast the showdown beginning at 8:00pm ET. Keep in mind that PokerGO is a subscription-only service, so it will cost money to watch the match. The first hour, though, will be on PokerGO’s YouTube channel for free.

Hellmuth and Dwan already have a heck of a history on High Stakes Duel. In August of last year, Dwan defeated Hellmuth, winning $100,000 from the 16-time World Series of Poker gold bracelet winner, and ending Hellmuth’s streak of seven High Stakes Duel victories.

The two met up again in Round 3 in January, each risking $200,000. This time, Hellmuth exacted his revenge and won twice the money he previously lost.

There was some question afterward if the two men would go at it again, but it sounded like they would. Hellmuth was confident that Dwan would opt-in, saying, “I know you’re rematching…this time for $800K.”

If that sounded convoluted, let’s explain how High Stakes Duel works. Stakes start at $50,000 for each player. After the first round, the loser has the option for a rematch. If he or she bows out, there is as 30-day period during which another challenger can step in and continue the Duel. Each round, the stakes double.

The winner is obligated to keep playing. If a player’s winning streak starts during Rounds 1-3, he or she cannot quit until they win three in a row (or, of course, lose). If the winning streak begins in Round 4 or later, they must win two in a row to cash out.

In High Stakes Duel III Round 1, Phil Hellmuth defeated sports commentator Nick Wright in the $50,000 round. Wright declined a rematch, at which point Tom Dwan stepped up. So, even though the next match was Dwan’s first, it was still Round 2, as it continued from where Wright left off. Dwan won Round 2 ($100,000 buy-in) and Hellmuth won Round 3 ($200,000 buy-in).

Since Hellmuth began his new winning streak in Round 3, he still has two more to win before he can cash out. Thus, if he wins Round 4, he will have to play Round 5 if Dwan or a replacement wants to put up $800,000. Similarly, if Dwan wins Round 4, he is still on the hook for one more round before he can cash out if anyone wants to play him in Round 5.