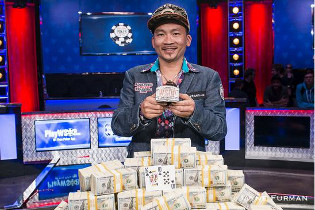 If you are going to play in the World Series of Poker Main Event for the first time, might as well make it a good one. Qui Nguyen, with only $9,000 in live tournament earnings and a WSOP Main Event rookie, won the 2016 WSOP Main Event early this morning, bagging a gaudiest of diamond and ruby-encrusted bracelets and $8 million.

There was a chance that the night could have ended very quickly, considering this is what the chip stacks looked like:

But on the very first hand, we got a glimpse of what was in store, as Nguyen and Cliff Josephy got into a raising battle pre-flop until Josephy was all-in with A-Q suited. Nguyen called him with A-4 and promptly doubled-up Josephy. Josephy later got the worst of a set-over-set situation with Gordon Vayo to sink under 10 million chips and while he was able to double-up once, he soon bowed out in third place.

Going into heads-up play, Vayo had a solid lead over Nguyen, 200.3 million chips to 136.3 million. That lead didn’t last long, though. Nguyen used an aggressive style of play that we haven’t seen at the Main Event final table in a long time, relentlessly pounding on Vayo almost no matter what cards he held. Within nine hands, Nguyen had the lead.

Vayo did regain the chip lead for a short time, but on Hand 209 of the final table, the 27th hand of heads-up, Nguyen won the hand that changed the course of the tournament. It is odd to think that during an eight and a half hour heads-up match that just the 27th hand could be the turning point, but it was.

Vayo raised to 4 million pre-flop with A♦-9♥ and Qui called him with Q♣-5♣. The flop A♣-T♠-9♣, was, as ESPN commentator Antonio Esfandiari was rooting for all night, an action flop, giving Vayo two pair and Qui a flush draw. Vayo bet 3.7 million and Nguyen check-raised to 9.7 million. Vayo called and the two saw the K♠ come on the flop. Now Nguyen had a gutshot straight draw, as well. Nguyen fired out 27.7 million chips and after thinking about it a bit, Vayo called. The K♣ was dealt on the river, turning the tables and giving Nguyen a flush. Nguyen quickly moved all-in and for six to seven minutes, Vayo tanked. Esfandiari, praising Nguyen’s boldness, said that it would be extremely hard for Vayo to call and sure enough, Vayo finally folded, looking sick to his stomach about it.

And though the match went on for several more hours, that was really it for Vayo. Nguyen controlled the table the rest of the way, just beating on Vayo with any two cards. It was easy to see the contrast in styles: Nguyen was ultra-aggressive, fine with chipping away at Vayo’s stack hand after hand after hand, while Vayo was passive, sitting back and waiting for a big hand and a chance to catch Nguyen in a mistake.

Thing was, Nguyen never really made a big mistake. He certainly caught more cards than Vayo, but the rare occasions when both men had something, Nguyen’s hand wasn’t big enough to warrant him going all-in and doubling-up his opponent. When it got to desperation time, Vayo did double-up a couple times and once even pulled fairly close to Nguyen, but he could never keep that momentum going. You could tell from the telecast that while Vayo had a great attitude and was in perfect control, he eventually got frustrated that nothing he tried worked. Nguyen was steering the ship.

On the final hand, Nguyen raised to 8.5 million pre-flop with K♣-T♣ and Vayo moved all-in for 53 million with J♠-T♠. Nguyen called fairly quickly. The flop of K♦-9♣-7♦ gave Nguyen a big edge and that was it. The next two cards were low and Nguyen was the newest champion of the poker world.