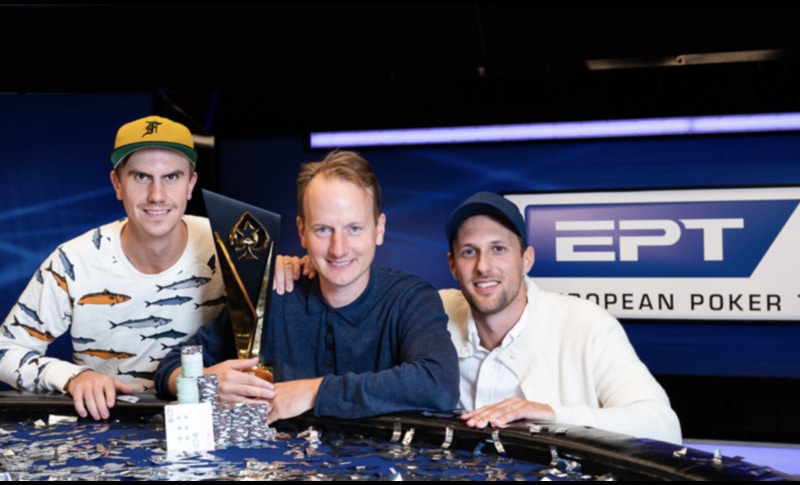 There was a clock on the final table at the European Poker Tour Barcelona Main Event on Sunday, but it wasn’t like the players needed it. Four players were eliminated from the action in the first 50 MINUTES of action, stunning those in attendance at the Casino Barcelona. After more than tripling that time, Simon Brandstrom was able to defeat Marton Czuczor to win the event.

Have You Got a Plane to Catch?

Brandstrom came to the final table with a healthy chip lead over Czuczor (18.5 million to 14.45 million), but it wasn’t like the remainder of the final table was bereft of chips. Rui Sousa was in good shape with 9.1 million chips, as was Diego Falcone (8.6 million). Only Yunye Lu (4.5 million) and Giovani Torre (4.45 million) could be considered “in danger” as their stacks were in the ten big blinds range.

How rapid was the action? On the very first hand of play, Lu saw Brandstrom make a raise and, figuring Brandstrom for a steal, called from the button. Czuczor also was interested in what Brandstrom was up to and he came along from the small blind, as did Falcone in the big. FOUR HANDED (remember, this is the first hand of the day), the flop came J♣ 6♠ 5♣ and everyone checked to Lu, who fired away. Czuczor put him to the test with a raise and, after everyone else got out of the way, Lu moved all in and Czuczor called.

Czuczor’s A♣ 2♣ was technically ahead of Lu’s K♦ J♥, but he needed another club to make that knockout come about. He would miss on the 7♠ on the turn, but the K♣ on the river was just what the doctor ordered. On the very first hand, Czuczor had taken over the lead and knocked out Lu in sixth place.

It didn’t slow down from there. Czuczor would take out Torre on the next hand, flopping an Ace with his Big Slick to punish Torre’s K-J, then knocked out Falcone a bit later when he turned an eight for a set to leave the flopped pair of Queens for Falcone drawing dead. The three remaining players, stunned by the speed of the eliminations, talked a deal but were unable to come to a consensus. As such, the tournament moved on.

About 30 minutes after the deal talks had fallen through, heads up play was determined. Brandstrom raised the betting to 525K and Sousa, in the big blind, defended to see a 4-8-3 flop. Sousa would check raise a 500K bet from Brandstrom to 1.4 million, but Brandstrom wasn’t going anywhere. Brandstrom put the ultimate pressure on with an all-in and Sousa reluctantly made the call.

Sousa had caught the top pair on the flop (pair of eights), but Brandstrom was sitting back on pocket Jacks to pummel Sousa’s hand. A seven on the turn was absolutely no help to Sousa and neither was the four on the river. As the final card fell, Sousa shook hands with his tablemates and took off for the cage and his third-place prize.

Deal Goes Through This Time

With Czuczor and Brandstrom roughly even in chips (31.625 million to 28 million), a deal was the natural outcome. The two men negotiated an almost even split of the remaining prize pool, with Czuczor receiving €1,253,234 and Brandstrom €1,212,706 (the largest paydays in either players’ career) but left €77,460 and the trophy on the table to play for. With the financials taken care of, the two men settled in a fought it out for the title.

And fight they did. For almost three hours (more than three times the length of the first four knockouts), Czuczor and Brandstrom went back and forth with the chips. Czuczor was able to stretch out to a 3:1 lead at one point, but Brandstrom went on a smoking run of cards that saw the chip lead – and eventually the tournament – end up in his favor.

Arguably one hand changed the event. On a K-3-3 flop, Brandstrom would check the action to Czuczor, who popped a bet of 700K to the center and Brandstrom called. A six came on the turn, bringing another check-call from Brandstrom of 1.7 million. A ten on the river was seemingly innocuous, but the action wasn’t; Brandstrom checked again and, after a six million chip bet from Czuczor, moved all in over the top. Czuczor snapped off a call and was stunned to see what Brandstrom had. Brandstrom turned up a K-3 for a flopped full house, cruelly crushing the turned full house of Czuczor’s (6-3) into dust.

That hand completely flipped the standings, pushing Brandstrom to a lead he would never let go. On the final hand, the chips went to the center with Brandstrom’s pocket sixes going up against Czuczor’s K-Q. Once the board came paint-free, Brandstrom had completed what he started the day with – the lead – and won the championship of the EPT Barcelona.