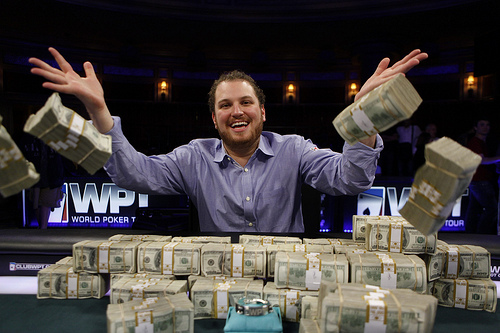 The gold continued to fly off the shelves at the 2022 World Series of Poker on Friday night. In one event, a veteran of the “high roller” wars was able to battle through the plebians to capture his fourth bracelet overall. In the second tournament, the champion also earned his fourth bracelet, but was more pleased with the charitable cause for which he was playing.

In Event #3, the $2500 Freezeout No Limit Hold’em event, the idea was simple – one buy-in, one chance at the gold, no reentry. This has become an unfortunate remnant of poker’s past as most tournaments have gone to the multiple reentry route for their tournaments. For this one tournament, however, the “old days” were recalled, and it was a veteran of the game who earned the accolades.

After coming to the final table with a massive chip lead, Scott Seiver was able to close the deal and capture his fourth WSOP bracelet in winning the championship of Event #3. Seiver, who started the final day of the event more than two million chips in front of David Goodman, still had some mines to dodge on his way to the title. Once Shawn Hood was dispatched in tenth place by Alexander Farahi, the “official” nine-handed WSOP final table was set.

Seiver was able to lord over the battlefield while those who were beneath him on the leaderboard squared off against each other. David Goodman came to the final table in second place and maintained that position in defeating Aditya Agarwal. The bell then tolled for Chris ‘Big Huni’ Hunichen, who was unable to spin up his stack after running into Goodman also. Seiver would keep Goodman at bay by taking down Lewis Spencer in seventh place.

Nick Schulman played an excellent game but was the victim of a bad beat at the hands of Sergio Aido. Holding Big Slick against Aido’s Big Chick (A-Q), Schulman looked as if he would double up…until a Queen came on the turn to flip the script. Aido faded a King on the turn to get the elimination of Schulman in sixth place.

Apparently Aido used all his “run good” on that one hand. He would lose all the chips he won from Schulman and lose some more of his own when he could not find a river call against Seiver on a 7♥ 4♦ 2♠ A♥ 5♠ board. He would depart soon after that when he got his scraps in against Steve Zolotow, who vacuumed them up and ended Aido’s day in fifth.

Zolotow did not fare too well either. He would be next to go at the hands of Goodman, with Goodman flopping two pair and turning a boat, to end Zolotow’s tournament in fourth place. This brought the tournament down to three handed play, with Goodman, Farahi, and Seiver battling it out amongst each other.

The chips flowed between the players until Seiver and Goodman squared off against each other. Goodman committed his chips to the center with an A-10, but Seiver’s pocket Queens were prime in the matchup. Once the King high board ran out, Goodman was out on the rail in third and Seiver went to the heads-up battle with Farahi with almost a 2:1 lead.

In the span of twenty minutes, Scott Seiver would close the deal. On the final hand, Farahi limp-shoved from the button and Seiver called. Farahi’s A-8 was a decent heads-up hand, but Seiver once again had the ladies, pocket Queens, and this time there was not any drama. The nine-high board never once threatened Seiver, as he captured his fourth WSOP bracelet and third since 2018.

Fourteen players came back on Friday to determine the champion of Event #4, the $1500 Six-Handed Dealer’s Choice tournament, and it was anyone’s game. Brad Ruben was the only player over the two million mark in chips, but he had a host of players in close pursuit. There was even some star power to the tournament, as bracelet winners Ben Yu and Naoya Kihara were alongside ESPN poker color commentator Norm Chad in pursuit of Ruben.

Alas, it was not to be for any of those who were not named Brad Ruben. Chad left in thirteenth place, with other pros like Brian Rast and Marco Johnson coming up short of the final table. Once Alfred Atamian was bounced out as the final table “bubble boy” in seventh place, Jaswinder Lally held the lead for the final six men.

Although Ruben had dropped to fourth place, he quickly got his name back in the game. He knocked off Charles Bransford in sixth, Yu in fourth, and Kihara in third to go to heads up with a 2.5:1 edge. It was too much for Lally to overcome, as Ruben only took 30 minutes to seal the tournament, taking it in a hand of Omaha Hi/Lo 8 or Better when his A-9-5-3 outflopped Lally’s Q-Q-8-7 on a J-A-K-4-7 runout.

After the tournament Ruben, who was wearing a T-shirt bearing the logo of the charitable cause Shields & Stripes, explained how his fourth WSOP bracelet was different from the other three. “This one is very, very special,” Ruben explained to the WSOP live reports team. “I kind of feel like this one is a little bigger than me…I wore this shirt. It’s a charity called Shields & Stripes. They help vets. They help first responders and police officers who have injuries that aren’t really seen. I honestly feel like this is bigger than me. I’m representing them. I’m donating one percent of my winnings but also, I’m trying to get the word out about organizations like them and also maybe spread the word on maybe other poker players donating to charities.”