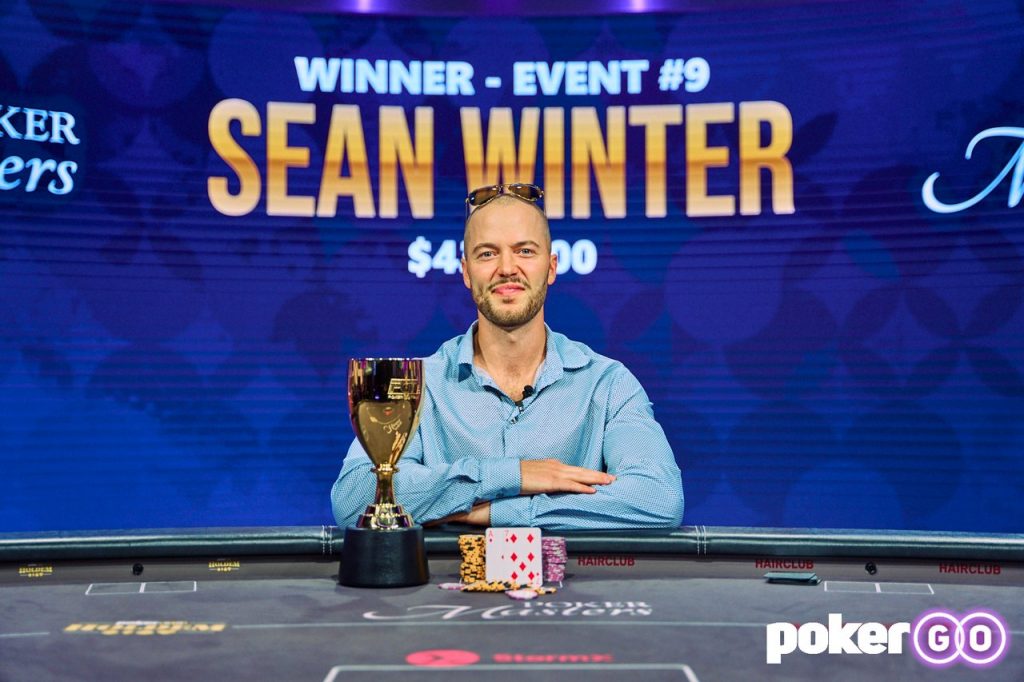 The 2022 Poker Masters is heading into its Main Event conclusion, but that is not stopping the jousting for position prior to that conclusion. In Event #9, Sean Winter emerged as the champion of the $25,000 tournament. Along with the win, Winter takes over as the leader in the race for the Purple Jacket (the crowning achievement of the Poker Masters series), but he must fade two runners in the Main Event to earn the overall championship.

Winter Comes from Middle of Pack for Win

At the start of action on Saturday, Winter was poised in the middle of the pack to make some moves. He was behind only start-of-day chip leader Justin Bonomo (2.165 million) and Seth Davies (1.8 million) when the cards went in the air, but he had the chip edge over Jason Koon, Brian Rast, and Nick Schulman. The chip stacks were quite close together, however, meaning it was anyone’s tournament to take.

Winter would get an example of this in the early action. He would double up Schulman to go to the bottom of the ladder, but just as quickly Schulman shipped his newfound chips to double up Koon. Winter would get those chips and some more back when he doubled up through Koon.

The first elimination came in a rather cruel manner. Schulman called off some of his chips against an at-risk Koon and, once the two men both turned up A-Q, it was thought there would be a split pot. Instead, Schulman would find a four-flush against Koon to send him out of the tournament in sixth place.

Winter did not sit back at the final table, insisting on pushing the action. He would eliminate Rast in fifth place to solidify his place on top of the standings, but Bonomo was not going quietly into the Vegas night. He would knock off Davies in fourth as the final trio hovered around the same level.

Of the three, it was Winter who went on the attack. He knocked out Bonomo in third place, his pocket fours standing up over Bonomo’s A-Q, which enabled Winter to go to heads up action against Schulman with a monstrous lead. Although Schulman would find one double up to take a slim lead, Winter came back when his A-Q outlasted the K-J of Schulman. On the final hand, Winter seized the title when his A♦ 7♦ held against Schulman’s K♠ 4♠.

The Main Event of the 2022 Poker Masters, the $50,000 No Limit Hold’em event, was able to draw decent support, especially for a high dollar event. 37 entries were in the till when late registration closed, setting up a prize pool of $1.85 million. The final six players will be the beneficiaries of that prize pool, with the eventual champion raking in a $666,000 payday.

Problem with six players being paid is that seven players return on Sunday to complete the 2022 Poker Masters. Leading the way for those seven players will be Scott Seiver, who has a slim lead with his 2.075 million in chips over Seth Davies’ 1.915 million stack. Lurking in third is Koon, with 1.405 million in chips, while the remainder of the table will have work to do to get into contention.

With his victory in Event #9, Sean Winter was able to catapult to the top of the race for the Purple Jacket. The award signifies the overall champion of the Poker Masters series, along with a little $50,000 bonus for the achievement. Because of his win in Event #9 and a runner-up finish in Event #7, Winter has eked ahead of Nick Schulman on the leaderboard:

There are only two men at the final table of the Main Event who can catch Winter atop the standings. In an odd twist, neither player is currently in the Top Ten on the leaderboard for the Purple Jacket. Both Erik Seidel and Seth Davies are down the leaderboard but, with a victory in the Main Event, would amass enough points to pass Winter and snatch the Purple Jacket from him.

The final table of the Main Event of the 2022 Poker Masters will begin at noon (Pacific Time) on Monday. PokerGO will be streaming the action from the PokerGO Studios in Las Vegas beginning at 1PM (Pacific Time), adhering to the delayed broadcast rules in Nevada.