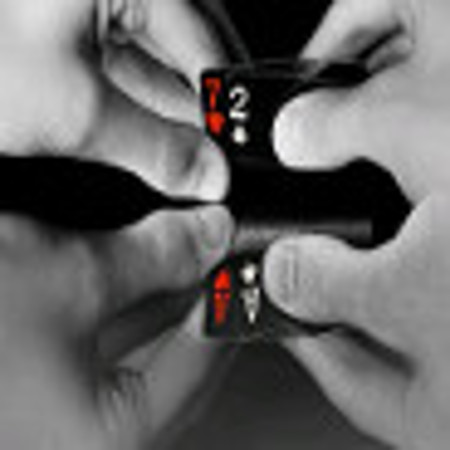 If you are any type of tournament poker player, then you’ve been in this position. You’ve taken your starting stack and built it up nicely, maybe doubled it or more. You’ve been in the position normally where you’ve been the chip leader at your table and have been dictating the play. But now your table is broken up and you’ve been moved to another patch of felt that has a stack that is bigger than yours.

A situation such as this requires that a player make some adjustments to what they’re doing. Even though there is only one person at the table that can take you out, you still have to have a strategy that keeps your stack safe. Here’s three approaches that you can take to make sure that this happens.

In many ways, this philosophy is something that can be carried throughout the tournament. Once you get to a new table, examine the stacks around you and note the three smallest stacks that are on the table. Make note of where they are in relation to your seat and what type of position that you’ll have over them at certain times. Then, when the situation is right, you can attack these stacks and continue to build your own mountain of chips.

Now that you’re the second stack, however, you also have to keep an eye on the big stack. If one of these “shorties” is in between you and the table chip leader, then you’ll probably have to let the chip leader feast on them. You want to have the position on the chip leader in any circumstance where you clash. You want to be the one dictating the tempo and, if the chip leader is in position, then it is going to be tough to do anything about it – save for having awesome cards.

Stay Away from the Chip Leader!

This is arguably the biggest thing that you have to do when you have a viable chip stack but aren’t the chip leader. There is absolutely no reason for you to clash with the table’s chip leader, especially if there’s enough chips out there for you both to feast. Having the discipline to stay away from any plays against the chip leader are the perfect example of the adage “discretion is the better part of valor.”

Especially if it is early in the tournament, there’s a long way to even just making the money. You cannot win the tournament at this point, so clashing with the table’s chip leader just isn’t correct from a survival standpoint. As the only stack that can take you out of the event, it is imperative that you stay away from such a situation. Even if you don’t get eliminated, prolonged battles against an opponent with superior firepower can often have a detrimental effect to your ammunition (your chips) and your mindset at the table.

If you get into a battle with the table’s chip leader, then you have to make sure of a few things. First, you definitely want to have position on the player. Without this, you’re allowing your opponent to dictate the pace of play and, perhaps more importantly, how much you’re playing for. If you have position on this player, you can control the pot size and make the appropriate decisions with all the information rather than just part of it.

Second, you have to have a good deal of information on the player, which you should have gathered if you’ve been playing for any length of time. What has the player been showing down (or has he?)? Has there been any deviation in his betting patterns? Is my opponent playing “loose” or has he had the goods when he comes in? These questions should be firmly in your mind before taking on the table’s chip leader.

Finally, when you do decide to take on the table chip leader, make sure you’re doing it with a strong hand. Yes, you can’t sit around and wait for pocket Aces or pocket Kings to attack, but you can make sure that when you get the chips moving that you have a decent hand to move with. This isn’t the time to be experimenting with playing an unsuited connector from under the gun or for playing a “lucky hand” out of position. You want to have some strength in the fight and usually the best way to do that is to have some strength heading into the battle.

While you’re not going to avoid going up against a bigger stack than yours for the entire tournament, you can dictate WHEN these occurrences happen. Not only is it simply a preservation tactic, it also allows you to garner information on the player without having to bump heads with them. Besides, there’s plenty of smaller fish in the pond…aren’t THOSE the players you should be attacking rather than the only fish that is bigger than you?