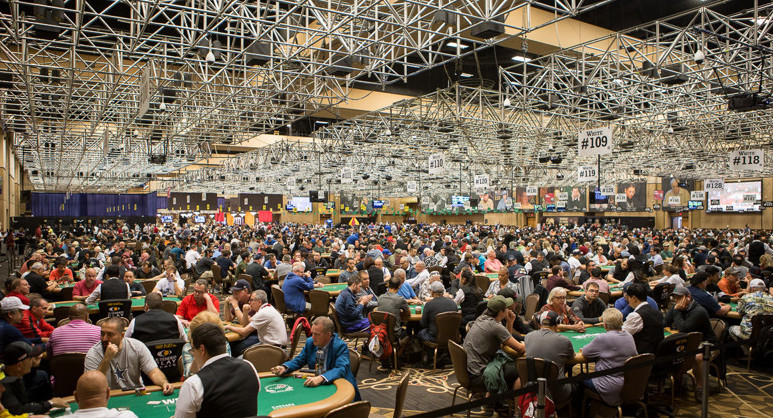 The first weekend of the 2019 World Series of Poker has shown some of the issues with putting on the biggest tournament in the world. With both the “BIG 50” Days 1B and 2A in action, the Omaha Hi/Lo Day 2, and the 50th Anniversary $50,000 High Roller event, there were delays in the action as there simply weren’t enough poker tables for action. That’s only going to get more problematic as the first Saturday of the WSOP begins.

Demonstrating the draw of the low buy-in, high reward tournament, Day 1B of the “BIG 50” smashed through Day 1A’s totals and reached the max entry level of 4800 players. This caused some delays for the start of Day 2A (the players from Day 1A) of this tournament, but they were able to get all the required action in for the schedule. News has already come to Poker News Daily that Day 1C of the tournament this afternoon has also maxed out its 4800 entries, putting the “BIG 50” well on course for shattering the record of the inaugural “COLOSSUS” event back in 2015.

For Day 2A – the players who took part in Thursday’s Day 1A – Mikhail Vilkov has emerged as the chip leader, sitting on a massive stack of 3.475 million in chips. He will be on top of the mountain as Joshua Thibodaux (3.125 million), Amer Torbey (3.025 million), Jose Chavez (2.915 million) and Justin Powell (2.905 million) round out the Top Five. The players remaining in the Day 2A field now have a few days off, as Day 3 of the tournament will not take place until Wednesday (the remaining Day Ones must play their respective Day Twos through Tuesday).

46 players will return on Saturday to fight it out for the next WSOP bracelet to be awarded. The tournament popped the money bubble on Friday, with players such as David Benyamine, Owais Ahmed, Luis Velador and Eli Elezra all taking home a little money for their efforts. It is Richard Fuller, however, who has his eyes set on something higher.

Fuller was able to eke out a slight lead over Cliff Schinkoeth, but the blinds and limits will be eating into everyone’s stacks. The players come back on Saturday with blinds at 5K/10K and playing limits of 10K/20K. With his stack, Fuller only has roughly 47 big blinds and he’ll have to protect from the massive swings that can occasionally happen, even in Limit Omaha Hold’em.

Ever since his breakthrough at the 2018 Poker Masters, Ali Imsirovic has been on a dominant tear. It has now extended to the WSOP, as Imsirovic has ridden his runner-up finish in Event #2, the $10,000 Super Turbo Bounty event, and parlayed it into the chip lead heading for Day 2 of the 50th Anniversary $50,000 High Roller event at the WSOP.

With a buy-in and a re-entry option until after the fourth level of Day 2, the players could conceivably pony up $100,000 for the tournament. It seems only one player ripped through both of those already, however, as 2018 Player of the Year Alex Foxen couldn’t find the mojo to build a stack on Friday. He wasn’t alone, as players such as Dan Shak, Ryan Laplante and Andrew Robl were busted on Friday but still have the option to come back on Saturday.

Of the 92 entries that have been received to this point (remember, late registration/reentry goes until the fourth level of play on Saturday), Imsirovic has seemed to have the magic touch. His 1.549 million stack is nearly half a million more than the runner-up, Ben Heath. And there are many other challenges that will face Imsirovic on Saturday lurking down the leaderboard:

Triple Draw Up Next

If it weren’t enough that potentially the largest tournament in the history of the event, a strong Omaha field AND more than four dozen High Rollers will all be in action on Saturday, the WSOP will also have Day 1 of the $2500 Mixed Triple Draw to deal with. This Limit event – which combines Triple Draw of three different disciplines of poker, Ace to Five Lowball, Deuce to Seven Lowball and Badugi – proved to be fairly popular in 2018 as 321 players came out for action. The defending champion of the tournament is Johannes Becker, who defeated Scott Seiver for the title, and he should be back to defend his crown.