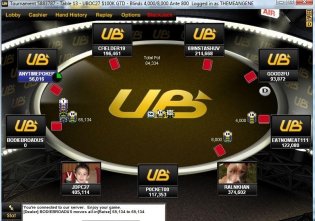 The poker world was stunned last week when Travis Makar, one of the people allegedly involved in the Ultimate Bet super user scandal, called into the DonkDown Radio show and revealed that he had a large number of documents regarding the site’s involvement in the scandal from years ago. Makar stated that he never worked for Ultimate Bet, but he obtained the documents through years of working on the computers of major players involved in the scam.

On Tuesday, Makar met with DonkDown Radio’s Bryan Micon to show him some of the documents he claimed to have at his home. One piece of evidence supposedly revealed an e-mail sent by current UB.com COO Paul Leggett to Zoltan “Brainwashdodo” Rozsa, who was allegedly trying to extort Leggett for information he had about the cheating incidents. Micon verified that the e-mail was dated June 30, 2008 and posted it on the DonkDown forum later that day:

If you are saying that you are giving up on the extortion and confirming that you will not disclose the information you took from us… I am very happy to hear this. I realize that you do not trust me, and obviously it is impossible for me to trust you. Before you decide to disclose any information, I would just like to reaffirm that if you do release confidential company information, I will be forced to involve the police in this situation.

However, I would prefer to exhaust all avenues of negotiation prior to doing this. I realize that money is important to you and the confidentiality of our information is important to us. If you want to meet, I would be willing to give you a reasonable amount of money (much smaller than the amount you requested), but I need you convince me that day that you will bring all of the important information and you will stop with the threats and illegal activities against our company.

Leggett addressed the e-mail and other topics in his blog at UB.com on Wednesday:

“Firstly, I want to make sure everyone knows that I never made an offer to pay off Brainwashdodo and I never did pay or instruct any payment to be made to Brainwashdodo. It is true that he tried to blackmail our company by threatening to release a bunch of confidential company information including financial records and player data. However, after unsuccessfully trying to pursue him with the help of local law enforcement, I simply told him that I was unwilling to pay anything to him.”

“There is no doubt that Brainwashdodo did try to extort me,” Leggett continued. “I did arrange to meet him because I did not want him to post our company’s data and I wanted him arrested for trying to blackmail the company. I do remember considering paying him to not release a bunch of information, but after a great deal of thought, I decided it was best not to take part in the extortion and we never paid him a dime.”

Leggett’s blog was posted during the airing of Wednesday’s DonkDown Radio show, which featured guests Makar, blogger Haley Hintze, and poker player Brad Booth, who said he lost around $1.5 million during the superuser scandal. Booth had his life turned upside down during that period and shared his side of the story with the hosts, including an occurrence in which Russ Hamilton called him immediately after Booth had a losing session on Ultimate Bet to offer him money to continue playing. Booth accepted and said he lost the money within 10 minutes.

Makar then joined the show and confirmed that Booth had been cheated after he named off accounts that he had lost money to during the scandal. Makar was amazed that he had never met Booth before, but the two discussed their relationship with Hamilton and shared a similar bond after they each lost nearly everything following the scandal.

Poker News Daily will continue to follow this story as more develops, so stay tuned.