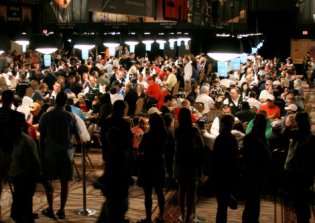 The World Series of Poker $50,000 Poker Player’s Championship kicked off Saturday with 128 players, an eight percent increase from last year. The stout field generated a prize pool of $6,144,000 with first place earning $1,720,328. Second place will also pick up a seven-figure score of $1,063,034. Needless to say, this event could weigh heavily on the final results of your WSOP fantasy pools.

The $50,000 Poker Player’s Championship was created in 2010, replacing the $50,000 H.O.R.S.E. World Championship that had originally been formed in 2005. It is the largest buy-in annually at the WSOP, attracting the biggest names in the game, which we saw again this year. The event features an eight-game rotation of No Limit Hold ’em, Limit Hold ’em, 2-7 Triple Lowball, Razz, Seven Card Stud, Omaha High-Low 8 or Better High-Low Split, Pot Limit Omaha, and Seven Card Stud 8 or Better High-Low Split.

Defending champ Michael Mizrachi is the shortest stack entering Day 2. Mizrachi, who collected $2,333,000 for his victory last year, will enter Sunday with only 8,200 in chips. The “Grinder” had a miserable 2011 World Series up until this week when he finished runner-up to Owais Ahmed in the $2,500 Omaha/Seven Card Stud event for $158,000. That remains Mizrachi’s only cash of the series.

The other two living former champions of the $50,000 event, Freddy Deeb and Scotty Nguyen, didn’t register this year, meaning they won’t have the opportunity to become the first two-time winner of the Chip Reese Memorial Trophy.

Only five players were eliminated on Day 1, the first being Arturo Diaz in the Pot Limit Omaha round. Phil “OMGClayAiken” Galfond had a set of queens against Diaz’s set of tens on the turn, and Diaz was unable to improve on the river to send him out in 128th place. He was later joined on the rail by Phil Laak, Andrew Pantling, Jani Sointula, and Eli Elezra.

The current leader in the 2011 WSOP Player of the Year race, Ben “benba” Lamb, has a healthy stack of 198,100 going into Day 2. Phil Hellmuth, who sits second in the Player of the Year standings, trails with 185,600. Sam Stein (third), Mikhail Lakhitov (fourth) and Mitch Schock (fifth) didn’t play in the event, but John Juanda (sixth) could take the lead with a big finish in this one. He finished Day 1 just above the starting stack with 159,000.

Play will resume at 3 p.m. PDT Sunday. Here’s a look at the Top 10 Stacks and other notables heading into Day 2 of the $50,000 Poker Player’s Championship: