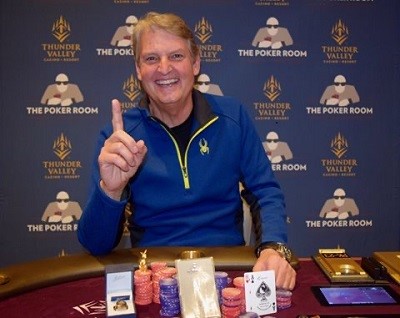 Lon McEachern is not in the Poker Hall of Fame. He and his long time World Series of Poker broadcast partner Norman Chad have been finalists together, but they have yet to make it. When and if McEachern is enshrined, it will be for his contributions to the game in the broadcast booth, not at the poker table. But heading into this past weekend, McEachern did earn himself a bit of glory on the felt, winning the WSOP Circuit Thunder Valley $400 Seniors Event.

It was the first WSOP Circuit ring victory for McEachern and the $15,008 prize was his largest-ever cash. He has a list of live tournament cashes going back a decade, but he has clearly been just a casual player, only once hitting the five-figure mark (in his first recorded cash, to boot). McEachern’s live tournament earnings are now over $75,000.

He now has something to lord over his buddy Norman Chad, who has a much shorter tournament resume, but one that includes several deep runs in WSOP events, including a final table, which he likes to mention often during broadcasts.

“Norman Chad doesn’t have one of these. That’s all I need to say,” McEachern told Thunder Valley director of poker operations Ben Erwin in his post-tournament interview.

McEachern said his path to victory was “easy almost” and that he was rarely at risk for all of his chips.

“There might have been a couple, but I was always ahead,” he said. “I never had to come from behind. There were a couple of huge hands at the final table. I flopped the world against the guy who’d been my nemesis all day, I had ace-king of diamonds and he had pocket fives. He had been the chip leader most of the day, and I flopped an ace and two diamonds, got the diamond, and took about 95 percent of his stack and that really helped out.”

McEachern was behind 2 million chips to 1.6 million chips going into heads-up play against Calvin Norman, but that was clearly within striking distance. He whittled Norman’s chip stack away until his opponent was nearly down to the felt and then finished him off. With A-8 versus A-4. Neither man hit anything on the board and McEachern had the biggest win of his life.

Lon McEachern has now qualified for the 2023 WSOP Tournament of Champions, so it would certainly be fun to see him make the final table and have Norman Chad provide the broadcast commentary on his quest for a bracelet.