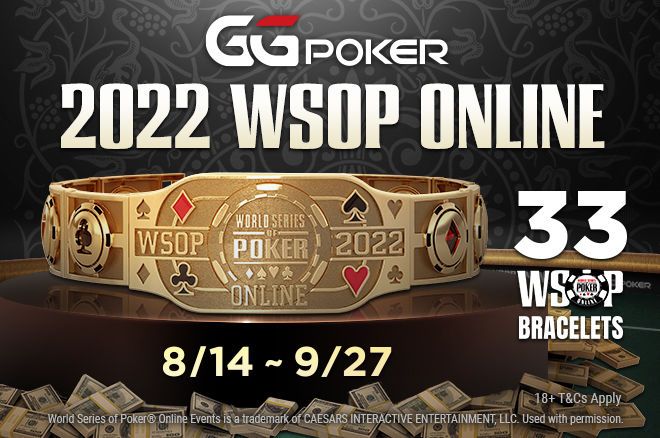 Just when you think that the season is done for the World Series of Poker, they come back into the game. The organization recently announced the schedule for the World Series of Poker Europe’s triumphant return, and they aren’t done with that. WSOP officials have now announced that they will be going online for two different WSOP Online series that will award bracelets, one for U. S. competitors over WSOP.com and one for the international community over GGPoker.

WSOP.com has been able to stretch over four states as of today, and those players will be eligible to play in the multitude of WSOP Online bracelet events that will be offered. From September 10 to October 18, players in Nevada and New Jersey will play against each other (as they have since they were compacted), while Michigan and Pennsylvania will be playing against competition within their own states. Thirty-three of the tournaments will be played out over the Nevada/New Jersey compact, while Michigan and Pennsylvania will have six tournaments each.

The headliner for each of the three series will all be held on October 16, and they will be completed in the same day. Each of the three schedules will feature a $1000 Championship Event on that day, and it will be the final of the six scheduled events in both Michigan and Pennsylvania. New York/New Jersey players will have a couple more days of action after that, including a $10,000 Super High Roller tournament on October 18.

Unfortunately for players, you will have to relocate to Nevada, New Jersey, Michigan, or Pennsylvania to take part in any of these events. Geolocation will not allow anyone from outside of these states to participate in any of the 45 tournaments. It should be a boon for the hotels in those states as many are surely going to make the trek for the possibility of picking up a WSOP bracelet and some serious cash.

GGPoker Welcomes International Field…But Not the U. S.

GGPoker again be utilized for bringing the international community their opportunity to win a 2022 WSOP Online bracelet. GGPoker can be accessed by most of the world, but one major segment is unavailable – U. S. players. They will have to travel to either Canada or Mexico, their closest neighbors, if they want to get in on the action.

Thirty-three events will also make up the WSOP/GGPoker schedule, which will have somewhat higher stakes for the players. In particular, a $5000 Six Handed No Limit Hold’em Championship will take place on August 23. The action starts on August 15 with “The Housewarming,” a $500 tournament with a $2,022,000 guaranteed prize pool. The festival will conclude on September 26 with the $5000 WSOP Online Main Event with a $20 million guaranteed prize pool.

“No one wanted to see this year’s WSOP come to an end,” Senior Vice President and Executive Director of the World Series of Poker Ty Stewart stated during the announcement of the two schedules. “However, in many ways, the return of WSOP Online is even more exciting. Together with GGPoker, we have a clear vision to make this festival annually the biggest deal in online poker so that the WSOP offers players the marquee event in both live and online poker each year.”

If you live in Nevada, New Jersey, Michigan, and Pennsylvania, you can get a look at the schedule of events here. Those who are looking to play the GGPoker roster of events can head here to check out what is happening. For the traditionalists, this may not be their cup of tea but, for a (literal) world of people, they will welcome the chance to compete for a WSOP bracelet in the online arena.