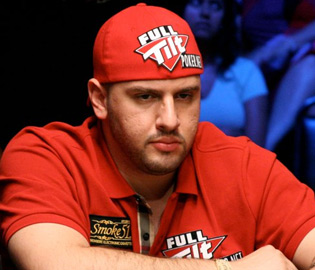 On Tuesday night, Day 4 of the 2010 World Series of Poker (WSOP) Main Event played out on ESPN. The all-important money bubble popped during the evening and coverage kicked off at 9:00pm ET on the cable station. James Carroll was the chip leader entering Day 4 at 803,000 and, amazingly, all four Mizrachi brothers remained in the hunt.

The feature table housed former back-to-back Main Event champion Johnny Chan, who sat in ninth on the leaderboard with a stack of 636,000. Among his tablemates were poker pro Brett Richey, Dan “Wretchy” Martin, and three-time boxing champion Jeff Fenech. Costa Rican Eric Capra doubled up through Chan early on after hitting a set of jacks on the flop. In a similar hand out in the field, Robert Mizrachi busted a player by cracking pocket aces with pocket jacks after flopping a set.

PokerStars pro Barry Greenstein was all-in against Jason “JCarver” Somerville with A-Q against A-K. Somerville flopped top two pair and Greenstein signed a copy of “Ace on the River” over before heading to the exit. Former Main Event champ Dan Harrington called all-in pre-flop with A-K after an opponent 4bet with pocket kings. Despite getting it in behind, Harrington hit his three-outer on the turn and doubled up, telling his opponent, “You didn’t deserve that.”

Scotty Nguyen was all-in, his tournament life hanging in the balance with pocket kings against Hafiz Khan’s pocket eights. The board blanked out for Khan and Nguyen stacked up the pot. Elsewhere, reigning WSOP Europe Main Event winner Barry Shulman flopped a pair of sixes and moved all-in. However, an opponent tabled a pair of queens and Shulman was ousted. He’ll now head to London to begin his title defense on September 23rd.

Hank Azaria’s pocket queens were sitting pretty until an opponent with A-K spiked an ace on the river to send “The Simpsons” voice home. Also departing was barker extraordinaire Ted Bort, the CEO of Allied Network Solutions, who may best be remembered for his countdown hand against Prahlad Friedman. On Bort being eliminated before the money bubble, ESPN commentator Norman Chad quipped, “Shouldn’t he howl when he’s knocked out?”

The action saw tight play around the money bubble, including Smith fold pocket fours before the flop, and ultimately Tim McDonald fell by the wayside as this year’s Bubble Boy. He was all-in with pocket queens on a flop of A-A-2, but ran into A-2 for a boat. McDonald was introduced in front of the crowd and will receive an entry into next year’s WSOP Main Event. The top 747 players finished in the money out of a field of 7,319.

Smith departed shortly thereafter in 730th after his pocket threes could not hold up against Max Casal’s A-6. Then, after the Mizrachis became the first four brothers to make the money together in WSOP history, Eric Mizrachi departed as part of a three-way all-in. Eric held pocket jacks against pocket rockets and A-K and could not improve; the best pre-flop hand held and he departed in 718th.

Meanwhile, Donny Mizrachi tripled up after winning a three-way all-in of his own with K-Q of hearts against pocket tens and David Benyamine’s 8-6 of spades. Donny flopped the nut straight and dodged a flush draw on the turn and river to survive with a healthy stack. A shot of Jonathan Duhamel showed the November Nine chip leader wearing a whopping eight PokerStars logos on his hoodie, while elsewhere in the Amazon Room, high-stakes cash game pro Patrik Antonius came out on the short end of a race to stunt his Main Event run.

Fenech busted after his A-5 could not draw out on Chan’s A-10 suited and a similar fate found Allen Cunningham, whose cash in the Main Event was his only in the money finish of the 2010 WSOP. To round out the two-hour broadcast, Michael Mizrachi doubled up to 245,000 at the expense of German Jan Boye, who Chad dubbed “Darvin Moon with an accent.” Boye was giddy as a schoolgirl during several moments of the broadcast, including in a hand where he sent both Kassela and Tom Duong to the rail.