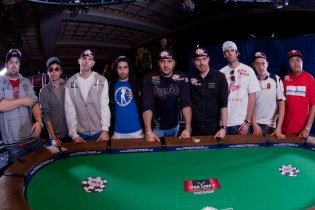 On Tuesday night, the 2010 World Series of Poker (WSOP) Main Event November Nine was determined as part of ESPN’s continuing coverage of the tournament. The back-to-back one-hour episodes featured the second half of Day 8, when 18 players remained. Pascal LeFrancois was the chip leader and 14 players were American.

Two stacks at the feature table clashed for the first elimination of the night. Scott “BigRiskky” Clements was shown the door in 18th place after his A-Q ran into Matthew Jarvis’ A-K. Michael Mizrachi held A-J and was the initial raiser in the hand, but folded after Jarvis moved all-in. Clements, who was looking for his eighth WSOP final table, received nearly $400,000.

Soi Nguyen scooped a 5.82 million chip pot off Brandon Steven. Then, David Baker moved all-in on a Q-2-4 flop with a spade flush draw, but Jonathan Duhamel showed pocket kings for an overpair to the board. Two red cards came on the turn and river and Duhamel became the new chip leader. Baker recorded five top 20 finishes at this year’s WSOP.

Ben Statz exited in 16th place after Jarvis called his all-in with K-Q. Jarvis told his opponent, “I thought you were doing it lighter than that” and promptly hit quads to become the new chip leader. Then, Mizrachi doubled up Hasan Habib to fall to a meager seven big blinds. After Habib doubled up, Matt Affleck was bounced in stunning fashion. On a board of 10-9-7-Q, Affleck shoved all-in for 11.63 million with pocket aces. Duhamel, holding a wired pair of jacks and a gutshot straight draw, made the call to build a pot worth 41 million.

The river was an eight, sending Affleck out in 15th place after Duhamel’s miracle straight came through, stunning everyone at the Rio. The room was completely silent when the bust out occurred and Affleck buried his head in his hat. As Duhamel raked in over 25% of the chips in play, Affleck walked out of the Amazon Room and later returned to shake hands with his opponents. He finished 80th last year.

To start the second one-hour episode, Mizrachi doubled up with kings against K-J, but his stack still totaled less than 20 big blinds. Then, Duy Le exited in 13th place at the hands of John Dolan. Le was the last elimination for a $500,000 payday; all others eliminated before the November Nine would receive $635,000.

UB.com pro Adam “Roothlus” Levy was the next to depart. Levy was all-in before the flop with K-Q against Duhamel’s aces. “Roothlus” turned a king to make matters interesting, but a benign deuce on the river sent him out in 12th place. He finished 48th in this tournament two years ago.

LeFrancois blew up to exit in 11th place after entering Tuesday’s action as the chip leader. After Joseph Cheong 3bet to 2.55 million before the flop with pocket kings, LeFrancois, who called the original raise with Q-J of spades, 4bet all-in. Cheong insta-called and had LeFrancois drawing dead to the river. LeFrancois punched a door of the Amazon Room open and departed the 2010 WSOP Main Event just short of the November Nine.

In real time, six hours would pass between LeFrancois’ elimination and the November Nine being determined. On Tuesday, ESPN devoted about 30 minutes to the period. Steven doubled up to 6.4 million through Mizrachi. Also doubling was Filippo Candio, who moved to 20 million in chips after his aces held against the A-K suited of John Racener. Fellow Italian poker pro Max Pescatori was among those in the crowd railing Candio in the waning moments of Day 8.

In the end, Steven could not draw out on pocket queens with A-K, setting up the November Nine. Next Tuesday, the coverage on ESPN of the final table will begin at 10:00pm ET. ESPN officials plan to have the episode run for two hours, but reserve the right to go longer as needed.