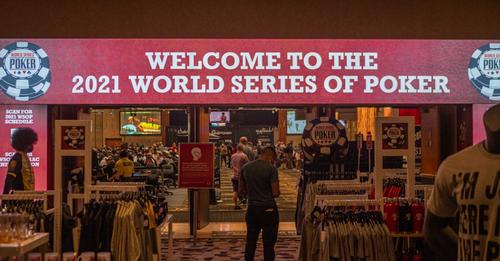 The 2021 World Series of Poker Championship Event is wheeling its way into the final days of the event. After Day 5 action, there are only 96 players remaining from the original field of 6650 players. Once again near the top of the leaderboard is Day 4 chip leader Damon Colillas, but he does not hold the TOP slot; that goes to poker professional Koray Aldemir, who will start Day 6 of the tournament stacked with over 14 million in chips.

No Repeat World Champion in 2021

From the 292 players that came to the floor of the Rio All-Suites Hotel and Casino on Saturday, there was a great deal of attention on two of them, former World Champions Chris Moneymaker (2003) and Qui Nguyen (2016). They were the final two men with a chance to repeat as WSOP Championship Victor, but both faced a bit of a battle with their depleted stacks (Moneymaker only 621K in chips, Nguyen with 1.146 million).

With the shorter stack, Moneymaker was the first to head to the exits. He would get his final chips to the center with A-J off suit against Vladas Tamasauskas’ pocket sixes and the flop did absolutely nothing to help the former World Champion. Coming down 7-6-3, the flop left Moneymaker immediately drawing dead in the hand, unless it ran out with straight cards to complete the board. That dream ended when a second trey hit the turn, giving Tamasauskas a full house and ending Moneymaker’s run at a second WSOP bracelet in 260th place ($38,600).

Nguyen would last a bit longer than Moneymaker, but he would meet the same demise. Nguyen would push his chips in on a race situation as well, taking his A-Q off suit against Jesse Lonis’ pocket eights in the mano y mano battle. The board would not come with anything to help the 2016 victor of this event, running 9-9-3-10-K, earning Nguyen a 241st place finish ($38,600) and ending the dream of a repeat World Champion for 2021.

Colillas started the day with five million in chips and he would never go under that stack for the entirety of the day. By the late action, Colillas had doubled that stack up despite being on the featured table under the glare of the PokerGO streaming cameras. He would finish off the action on Saturday night by accumulating 12 million in chips for ammunition heading to Day 6.

Colillas did have to relinquish the lead in the tournament, however. Aldemir was highly active throughout the day, but it would be a hand in the final level of the night that would catapult him into the chip lead. Ognyan Dimov was decently stacked with four million chips when he decided to clash with the larger stack of Aldemir, eventually playing it out to a flop and turn of 5♥ 8♦ 2♥ 3♦. Aldemir, in the small blind, decided to check his option on the turn to Dimov, who decided to light the wick.

Dimov fired out a 525K bet and Aldemir responded with a check raise to 1.445 million, to which Dimov responded with an all-in push. Aldemir considered his options and made the call in building one of the largest pots of the tournament to this mark:

Needing a diamond, six or an Ace, Aldemir saw the river deliver with a 9♦, shooting the German into the lead for the tournament with over 14 million in chips and sending Dimov to the cage to pick up his $50,900 for his 104th place finish and his thoughts of what could have been.

Aldemir didn’t stray away from that stack for the rest of the session, comfortable in the fact he would lead the way at the start of Day 6 on Sunday.

The Top Ten players represent five different countries (U. S. with four, Germany with three, Spain, Canada and Argentina). Other pros who still have potential for driving deeper in the Championship Event include Chance Kornuth (21st place, 5.92 million), Dragana Lim (27th, 5.555 million), and Stephen Chidwick (47th, 3.71 million), while Nick Petrangelo (one million chips), businessman John Morgan (2.6 million) and Stephen Song (2.78 million) will have some work to do if they are to climb out of the basement.

Day 6 will begin at 11AM (Pacific), with the plans to get as close to 27 players left as possible. Monday’s Day 7 action will play down to the final table, with the champion crowned on Wednesday. The eventual winner will be the next World Champion of poker and the beneficiary of an $8 million payday.