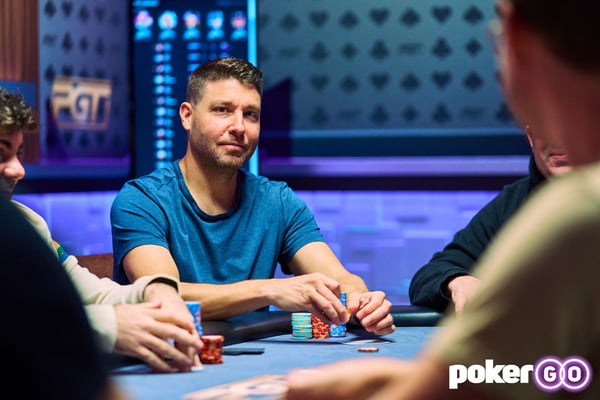 After the debacle regarding the Stairway to Millions II, PokerGO needed to make a solid comeback. Fortunately for them, the 2022 Poker Masters started on Wednesday, bringing what has been a tournament series that has proven to be popular. The first of its twelve event roster kicked off on Wednesday and played down to its final table, with longtime PokerGO Tour supporter Jeremy Ausmus at the head of the table.

The Poker Masters tournament series is another “made for streaming” creation by PokerGO, but it actually has a solid base in the tournament poker world. Created in 2017, the Poker Masters series was one of the first solely dedicated “High Roller” series in the tournament poker world. It’s series of $10,000 buy in events, capped by a $50,000 Main Event, and was big enough to draw some serious players despite the awarding of a questionable Purple Jacket (meant to elicit comparisons to golf’s Masters’ Green Jacket) to the eventual overall champion.

That first event back in 2017 brought some of the powerhouses of the “High Roller” tournament poker world. A previously shadowy player, Steffen Sontheimer, captured the first Purple Jacket and has since become a staple in the tournament poker world. The next year, Ali Imsirovic announced his presence on the scene by winning the overall Player of the Series title and the wardrobe accoutrement, while Sam Soverel brought the jacket back to the Americas in 2019.

The COVID pandemic of 2020 would have a significant impact on the tournament poker world, but the Poker Masters was one of the few tournaments that improvised in moving online. The change saw Alexandros Kolonias take home the overall championship and, in 2021, Kolonias would defend that title in a live setting. Last year, Michael Addamo stunned those in attendance at the Poker Masters in the PokerGO Studios in Las Vegas by winning the final two tournaments on the roster of events to surge from behind and capture the Purple Jacket.

Thus, the long history (and five years nowadays is an eternity) of the Poker Masters has come at a perfect time for PokerGO. The Stairway to Millions II at The Venetian in Las Vegas turned out to be a huge embarrassment for both the casino and the streaming channel. After less than stellar player numbers saw two events late in the schedule fail to meet their guarantees, someone (The Venetian? PokerGO?) decided to cancel the final two (and biggest dollar) tournaments of the series.

Can the 2022 Poker Masters restore some luster to the “High Roller” ranks?

Ausmus’ Strong Play Takes Him to the Lead

Mindful of the sight of empty tables at the Stairway to Millions II, PokerGO made sure that the players were in their seats for the start of play on Wednesday. Six full tables of seven players each ponied up their $10,000 (unlimited reentries) were on call for the “shuffle up and deal” announcement and the race was on. Several of those players would end up taking advantage of the reentry option, including several players who would make up the final table.

By the time the late entries (and reentries) had been counted up, 85 ticks were in the books to create a $850,000 prize pool. Thirteen players who can survive to the end of the tournament will be recipients for that wad of cash, with the eventual champion taking down a $204,000 payday. They will also earn those priceless points towards earning the 2022 Poker Masters Purple Jacket.

Jeremy Ausmus, who had been having a decent run at the Stairway events, carried that on through the start of action in the Poker Masters. He received the largest boost to his stack in a hand against Martin Zamani that could have just as easily ended his run in Event #1. On an A-K-K-6-6 board, Ausmus would push in for a sizeable portion of his stack; Zamani didn’t believe Ausmus or his bet, making the call, and would be dismayed when Ausmus turned up K-3 for the boat.

From that point, Ausmus would spin his stack upward. A double through Philip Shing pushed Ausmus into the Top Five and eliminations of Alex Foxen, Vikenty Shegal, Ben Yu, and Michael Jozoff thrust him into the lead. By the time the smoke settled, Ausmus held the edge over the crème of the “High Roller” world.

The final table of Event #1 of the 2022 Poker Masters will commence at noon (Pacific Daylight Time) and will be streamed on the PokerGO outlet. While that tournament is going on, the second event on the 12-tournament Poker Masters schedule, another $10,000 No Limit Hold’em tournament, will be starting for its two-day run. Can Jeremy Ausmus continue his run to the first title of this year’s Poker Masters battle? Can he continue his recent heater? By this point next week, a clearer picture on who is going to go home with the Purple Jacket will be known.