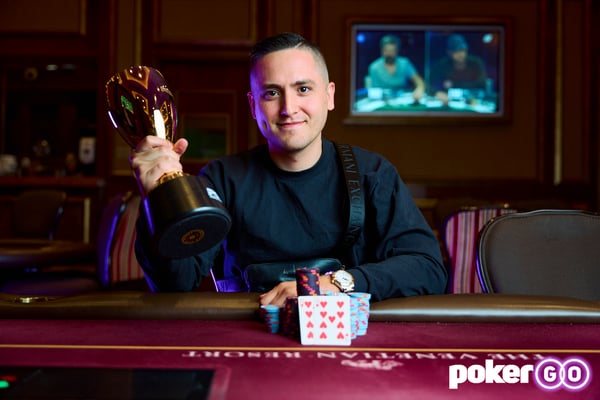 Unfortunately for Paul Zappulla, his victory in the Stairway to Millions II Event #9, the $15,000 No Limit Hold’em tournament, wasn’t the big story that came out of The Venetian on Saturday night. Faced with dwindling numbers and paying out massive overlays, the final two tournaments of the Stairway to Millions II – the $25,000 event that was to start on Sunday and the $50,000 Main Event that was scheduled for a Monday start – have been canceled. The cancelation allegedly has come from The Venetian but PokerGO, who were the creators of the tournament series for their streaming service, had to be concerned with the appearance of a tournament that barely could fill two tables.

Much like its Event #9 predecessor, the $15,000 Event #10 was plagued with low attendance from the start of the event. When the call was made to “shuffle up and deal,” there were fewer players on the felt than for Event #9. Only SIX players were seated at the start (compared to eight for Event #9), and the sextet included three players who had already won during the series – Michael Wang (a double winner), Andre Butler, and Michael Rocco.

Adrian Mateos was the first to take advantage of the reentry button in the event after he was beaten by Wang. Mateos’ pocket sixes were coolered by Wang’s pocket Jacks and, after the board ran out without a six, Mateos was dipping back into his pocket for another $15K. The relatively good news is that more players came, other than Mateos’ reentry, to help fill out a full table.

Cary Katz, Stephen Song, Adam Hendrix, Chance Kornuth, Justin Saliba (a newcomer to the Stairway series), and Zappulla all were able to get in before the late registration gun fired. It was not the performance you would expect for a “major” tournament poker event, however. The final numbers for the $300,000 guaranteed tournament were 18 entries, leaving The Venetian holding a $30,000 overlay for the tournament.

After the late registration period ended, Zappulla went on the rampage. He took a nice pot from Saliba to hold the lead when the nine-handed final table was determined, but the men weren’t even close to settling who would get paid out. Once Zappulla eliminated Sam Soverel in fourth place ($0), there were three survivors for the $300K prize pool – Zappulla, Mateos, and Song.

Mateos got off to a decent start, but Song doubled through him to send the Spaniard to the short stack. Song would complete the job moments later, eliminating Mateos in third and going to heads up play with more than a 4:1 lead over Zappulla. The drama was just beginning, however, as Zappulla battled back.

Zappulla would double up twice to pull within 400K chips of Song, then burst into the lead after calling down Song’s bluff on an eight high board. The twosome would then battle over an hour, swapping the chip lead back and forth, before Zappulla found the cards to take down Song.

On the final hand, Zappulla moved all in with a 10♥ 9♥ and Song called off his chips with a Q-6 off suit. A Queen on the flop gave Song an edge, but there were also a Jack and a nine on the board to put Zappulla with an open-ended straight draw. A six on the turn made two pair for Song, but the King on the river delivered the straight for Zappulla and the pseudo “Main Event” championship in the final event of the Stairway to Millions II.

Is the Stairway to Millions Done?

With the cancelation of the final two tournaments – and the most expensive events on the roster – the question must be asked…is the Stairway to Millions done?

The first Stairway to Millions saw similar smaller fields, but part of that could have been explained with the larger buy ins. That schedule, held in January, started at a $1000 buy in tournament before climbing through eight tournaments to a $100,000 finale. The first event showed promise, bringing in 190 entries, before dribbling off to only 19 entries for the Main Event.

The Stairway to Millions II never even got off the ground, despite lowering the buy-ins. The first tournament was a $400 buy in tournament, in theory looking to raise the number of players taking their shot at a potentially “bigger” tournament (through the STEPS format the Stairway to Millions utilized). The opposite was true, though; only 93 entries came to The Venetian to take part. The numbers continued to fall as the dollar value of the tournaments went up, until it reached the point that The Venetian (or is it PokerGO?) were actually paying out overlays in the last two tournaments because not enough players showed to break the guarantee.

The cancelation of the final two tournaments on the Stairway to Millions II schedule is a black eye to PokerGO. The streaming channel is significantly bereft of programming, especially the live programming that poker fans would desire, but it is very evident that the players aren’t just going to flock to anything that PokerGO offers. Is this the last time the Stairway to Millions will be played? It’s entirely possible unless PokerGO can make the series not only appealing to its viewers, but also make it appealing to the players who take part.