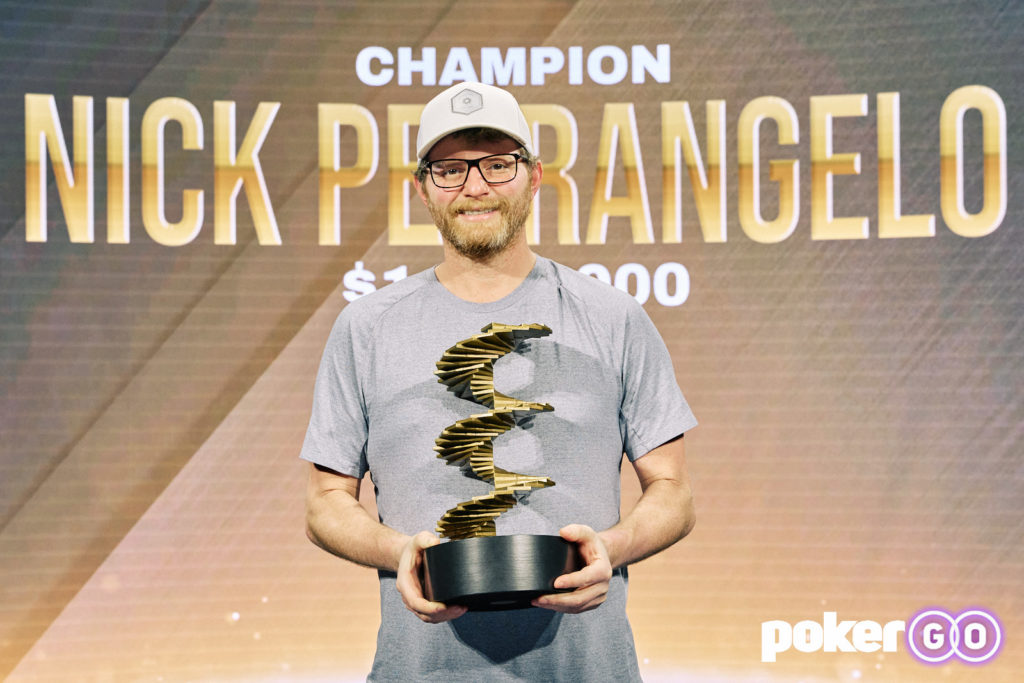 The inaugural “Stairway to Millions” has concluded in Las Vegas and, overall, PokerGO has to be pleased with the results of the event. One player who is incredibly pleased with how the battle turned out was Nick Petrangelo. Petrangelo took the victories in not only the lead-up to the final event, a $50,000 tournament that included a seat in the $100,000 Main Event, he also would take down that $100K tournament to earn over $1.5 million total over the last two events on the schedule.

With a $100,000 buy in, Event #8’s population was bound to be a bit on the smaller side. At 19 entries, however, it was able to eclipse the 18 entries that had been pulled in by the $50,000 PokerGO Tour Main Event at The Venetian earlier this month. Those 19 entries would play down to the three men who would square off for the $1.9 million prize pool on Thursday.

Petrangelo was in the lead with his 2.305 million chips, but the two men against him were also veterans of the “high roller” circuit. Joining him on the table were Sean Perry (1.085 million) and  David Peters (410,000), with these three men the only players who would receive anything from the largesse of the event. They did not take much time getting to action, with the lead actually swapping between the players rather than the runaway that many thought would occur.

Surprisingly, it was Perry who would make the first mistake. In a blind battle, Perry upped the action and Petrangelo made the call to see an A-Q-J flop. Perry put out a continuation bet and, after Petrangelo just called the bet, an eight came on the turn. Never one to back down, Perry fired a second bullet into the fray; just as persistent, Petrangelo made the call. An Ace on the river completed the A-Q-J-8-A board and presented several options to the players.

Perry now went all the way, pushing out his stack and putting Petrangelo to the test. Considering all the draws on the board – potential boats, a flush draw and straight draws galore – Petrangelo finding a call in this situation would be extremely daring, but he was able to find the button to look Perry up. Perry put out his 9-4 for complete air as Petrangelo slapped his Q-10 on the felt for Aces up to take the hand and the massive pot. Perry, down to only a measly 100K chip, soon departed in third place. The heads-up match between Petrangelo and Peters did not take much time. Although Peters started with the lead, within a few hands Petrangelo has thrust himself atop the leaderboard. The final hand would come after Peters committed his final chips holding pocket sixes against Petrangelo’s A♣ 10♣. Peters could not fade the clubs that Petrangelo held, with Petrangelo making a club flush to earn the title.

Taking back-to-back tournaments is nothing to sneeze at, but Petrangelo was quick to cite what helped him to pull off the feat. “Confidence in poker is a huge thing,” Petrangelo said in his post-game interview on PokerGO. “It’s a real thing because oftentimes you can get a little gun-shy when you’re running bad – if you’re running big bluffs and everyone always has the nuts, or vice versa if you’re making calls and you’re just running into it all the time. Sometimes it can kind of mess with your head a little bit and make you second guess yourself. When everything is working out and things are going well and you’re making big hands and the bluffs are getting through, it just helps you play better. It’s as simple as that.”