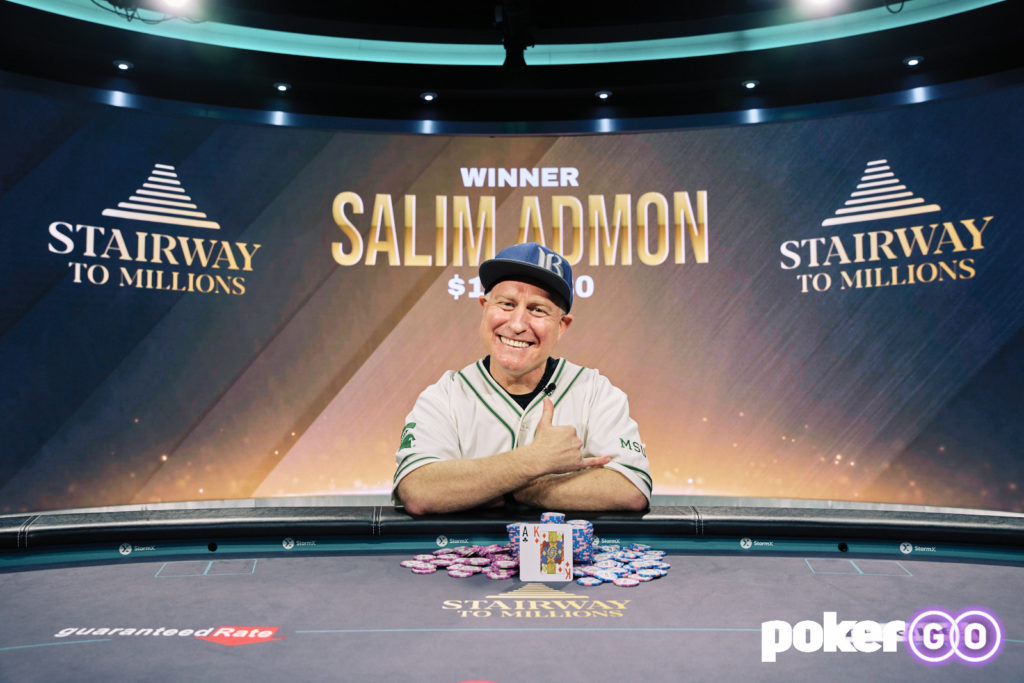 The inaugural “Stairway to Millions” tournament schedule at ARIA Resort & Casino in Las Vegas has certainly lived up to its potential. Meant to give players the opportunity to get into host PokerGO’s “High Roller” tournaments, the “Stairway to Millions” has actually had some decent player numbers as the value of the event went up. On Sunday, Event #4 on the schedule, the $8000 No Limit Hold’em tournament, took center stage, with Salim Admon emerging as the champion of the event.

The final six players who stepped to the felt Sunday afternoon were playing some outstanding poker to reach that place. Chip leader Chris Brewer has been in the mix in every event of the “Stairway to Millions,” while Jesse Lonis and Jeremy Ausmus also had been cashing in the events. Admon, for his credit, rolled into the final table in second place behind Brewer, while Bill Klein and Nick Petrangelo filled out the final two seats.

Brewer would keep the early pressure on the table, knocking out Klein in sixth place, but Lonis looked to keep pace by taking down Petrangelo in fifth place. That seemed to kickstart Lonis, as he would eliminate Ausmus in third place to bring the table down to three players. That trio quickly became a duo as Admon was able to send Brewer to the exits, his A-8 rivering another Ace to defeat Brewer’s turned pair of tens.

The heads-up match started out basically even – Lonis had 2.985 million chips, Admon 2.615 million – but Admon would slowly grind Lonis’ stack down and take a slight advantage. Although there was plenty of play in the stacks, the end would come rather quickly when both men thought they held the advantage.

On that final hand, Lonis raised the action to 150K with an A-J and Admon, with Big Slick, popped him with an all-in bet. Lonis quickly made the call and was running behind as the flop hit the felt. An Ace came on the flop, but it was joined by a King to give Admon two pair. Looking for running Queens to counterfeit Admon, the seven on the turn left Lonis drawing dead and, once the meaningless river was dealt (a four), Admon had won the championship.

Still Three Events on the Schedule

The “Stairway to Heaven” has been a bit of redemption for PokerGO’s “High Roller” tournaments. The ladder format sends all players that cash to the next event with a seat in hand. This has allowed for each of the tournaments to have fields that, if not monstrous, have at least been competitive.

To this point (including Event #5, the $15,000 No Limit Hold’em tournament), here is how the entry numbers have performed (with buy-in):

With the three events remaining the largest buy ins of the schedule – at $25,000, $50,000 and $100,000 – it might be impossible for the pace to keep up. Still, there may be more players intrigued with the “Stairway to Millions” than have been coming to the usual “High Roller” fare.