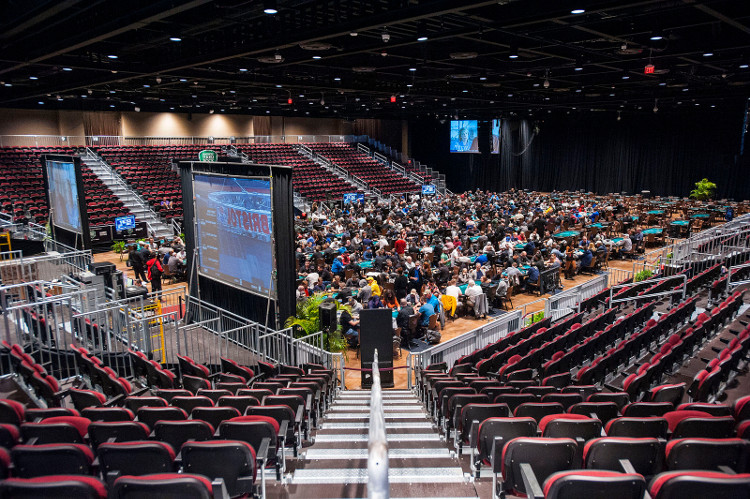 Everyone’s had their rest…now it’s time to get back in the pool! The 2022 tournament poker season seems to have just ended a couple of weeks ago as Father Time strolled out the door. With the arrival of the Baby New Year comes a brand-new fleet of tournaments and a few surprises on the major circuits as the calendar turns to 2023.

Just as everyone is shaking off their New Year’s Eve hangovers, the Borgata in Atlantic City is opening the 2023 tournament poker calendar with a bang. Called “The Return,” the $2000 ($200 juice) Mystery Bounty tournament has a million in guaranteed bounties for the event. Day 1A is set for action on Monday, January 2, while Day 1B will open for play later (7 PM) on Monday. In theory, the Borgata would have to see 500 players come out for this just to cover the bounties and the champion will be determined on Tuesday.

That tournament is just a prelude to the big show, however. On Wednesday, the Borgata plays host to a $5000 buy-in Championship Event with some special caveats. The tournament boasts a $3 million guaranteed prize pool and a guaranteed $1 million first-place prize for the eventual champion. The Borgata is making a bold statement with the reintroduction of tournament action to their offerings, and we shall see if the players respond in kind.

The World Series of Poker Circuit does double duty with the start of the new tournament poker season. The WSOP International Circuit kicks off its 2023 festivities with a twelve-tournament slate of events at King’s Casino in Rozvadov from January 4-24. At the same timeframe, the WSOP Circuit holds a U. S. tournament, venturing to the confines of the Choctaw Casino Resort in Oklahoma for play.

The PokerGO Tour isn’t going to let the smaller circuits get the upper hand. They will kick off the 2023 PokerGO Cup at the PokerGO Studios in Las Vegas beginning on January 11. That eight-event “High Roller” tournament schedule will culminate on January 19 with the $50,000 Championship Event of the made-for-streaming competition.

PokerStars is bringing back an old friend in 2023, however. The second-ever PokerStars Players’ Championship will take place in January in the Bahamas during the PokerStars Caribbean Adventure. Beginning on January 22 at the Baha Mar Resort and Casino in Nassau, the 46-event festival will have every trapping that a poker player might want in January – sun, sand, tropical drinks, and poker. Not only will the $25,000 PSPC take place, but plenty of bounty and High Roller tournaments will be in the mix.

Where’s The WPT? The EPT?

The major tournament poker circuits – the World Poker Tour and the European Poker Tour – are going to be waiting until a bit later in 2023 to start action. The EPT will be the first of that duo to start action with a visit to a new location. The EPT Paris will begin on February 15 at the Hyatt Regency Paris Étoile, featuring a High Roller (€10,000), a Super High Roller (€50,000), a Mystery Bounty ((€3000), and its usual Main Event (€5,000). The tournament schedule will wrap up on February 26.

The WPT is a much more curious schedule, at least as it is slated at this time. The WPT Prime will take center stage at the end of January with a trip to the Club Circus Paris for the WPT Prime Paris on January 31. The WPT then has no action scheduled until March, when the WPT Prime will pick back up at The Star Gold Coast in Australia and the WPT Prime Cambodia.

This is a troubling development. The L. A. Poker Classic (Commerce Casino) has been a venerable part of the WPT since its inception twenty years ago. It’s $10,000 Championship Event and the Frederic Remington “Bronco Buster” trophies have become synonymous with poker excellence and WPT lore. The Lucky Hearts Poker Open (Seminole Hard Rock in Hollywood, FL) has routinely drawn some of the largest fields in WPT history. While the WPT will go to the Hard Rock later in 2023, there is no ceremony nor mention of the departure of the LAPC nor the Lucky Hearts from the official WPT schedule.

Is the WPT ignoring its U. S. options in pursuit of international play? Poker News Daily did attempt to contact those in charge of the WPT for some clarification. As of press time, there was no response. The LAPC and the Lucky Hearts events will go on in January, but their impacts will be muted with the departure of the WPT.

The next thirty days will be important for players to get off on the right foot for the 2023 tournament poker year. And it will all start with the Borgata beginning tomorrow.