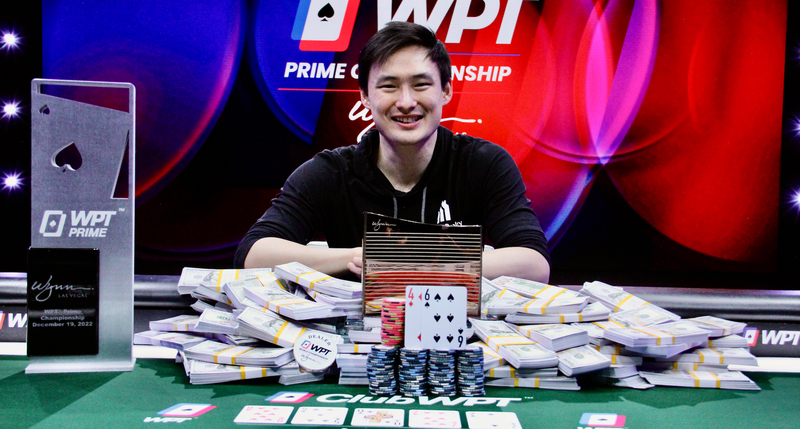 It’s been a long twelve months since the start of the 2022 tournament poker season. There have been some stirring runs – and some controversy – and there will probably be more after we’re into the New Year. For 2022, however, Stephen Chidwick looks to be the victor in one Player of the Year race, while Stephen Song used a late-season championship to steal away the Global Poker Index Player of the Year title.

He was in the first place slot the last time we looked at the races and the United Kingdom’s Stephen Chidwick was able to maintain that edge. It wasn’t without a sweat, though, as the two cashes that Chidwick earned at the Aria High Roller Series lacked the number of players to qualify for CardPlayer POY points. That lead Chidwick built – 6499 points – turned out to be enough to seal the deal.

Over the past six weeks, Colombia’s Farid Jattin made a run at Chidwick. Jattin notched three points-paying finishes, including two runner-up finishes in the WPT Progressive Bounty tournament and another Aria High Rollers event on December 20. The 1000 points that Jattin earned came up just short of knocking Chidwick off the top of the mountain.

Making the boldest move at the end of the year was Song, however. Song took part in the record-breaking WPT World Championship schedule, winning the WPT Prime Championship over a 5430-entry field. The tournament, with its $1000 buy-in, calculated out to 1320 points for Song, enough to catapult him into third place on the CardPlayer ladder (but, as you will see, much higher elsewhere).

As we close the tournament poker calendar for 2022, this is the way the Top Ten for the CardPlayer Magazine Player of the Year race will finish out:

It isn’t out of the ordinary for someone to come from behind late in the year to win the POY. In fact, it happens quite frequently on the Global Poker Index because of the complicated procedures set by the GPI to try to balance out smaller tournaments versus larger events. In 2022, however, the comeback was one for the ages.

Six weeks ago, Song was mired back in seventh place in the GPI standings, needing to find more than 142 points to pass Adam Hendrix for the top slot. With so many players between them – and the need for big points to replace lower-performing tournaments (the GPI uses the top thirteen performances for a player in earning POY points) – nobody would be forgiven if they didn’t give Song much of a chance.

That championship run at the WPT Prime was just what the doctor ordered for Song, however. The victory earned Song 422.20 points and, in replacing his worst performance for 2022, added 172 points to Song’s total. Although Hendrix himself was able to add some points with a run in the WPT World Championship, it wasn’t enough to hold off Song for the title.

With the 2022 tournament poker year in the books, this is how the Global Poker Index Player of the Year race will conclude:

Over on the GPI, the story was a bit different. Jordison was passed by two players, runner-up Kristen Bicknell-Foxen and eventual champion Cherish Andrews, on the Global Poker Index Ladies’ POY. What was the difference? Both Bicknell-Foxen and Andrews used deep runs in the WPT $10,000 High Roller the WPT World Championship (in Bicknell-Foxen’s case), and a $3000 preliminary tournament (in Andrews’ case) to make up the ground and pass Jordison for the title.

Although some smaller events are going on in the poker world, they most likely will not have an impact on these rankings. In another week, we’ll reset everyone to zero and start it all over again. Congratulations to the champions and here’s hoping everyone had a successful 2022!