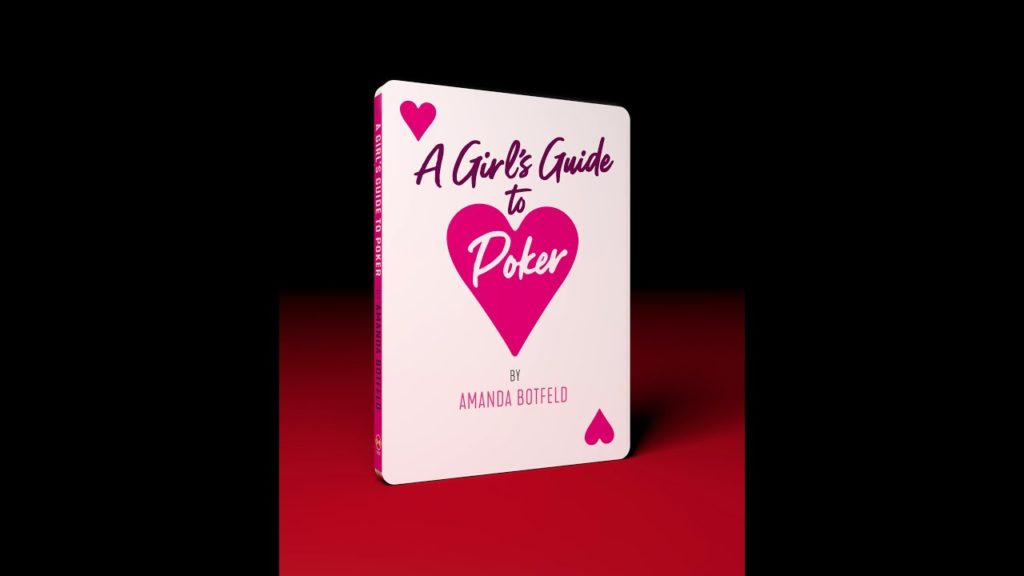 There are plenty of poker books out there that offer instruction on the game of poker in different manners. Some will take a distinctly academic approach to things, replete with charts and graphs to prove why you should float the turn when you have an open-ended straight draw. Then there are others that can present this info and have some fun along the way. A recent book from Amanda Botfeld, A Girl’s Guide to Poker, is a witty and informative effort that falls firmly in the latter category that can be used by anyone to improve their game.

Giving the Basics in An Approachable Manner

Botfeld, a respected writer who has appeared on the pages of the Wall Street Journal, Huffington Post and the Los Angeles Times, takes an approach with her Girl’s Guide that isn’t a normal approach. In a normal poker book, you are given the basics of the game, the hand rankings and other paraphernalia in a very dry format. Botfeld takes a different tack, using an approachable manner and somewhat joking attitude to get the basics of the game across.

Do not mistake Botfeld’s approach for being flippant, however. She’s serious about the game and that comes through in her work on the Girl’s Guide. She delves into all the important information that basic poker works go through – the possibilities of making certain hands, for example – and offers very precise and correct information throughout the book.

Botfeld doesn’t, however, weigh her reader down by simply and dryly stating the facts of the game. She cites academic studies regarding the game right alongside cultural references such as the women’s suffrage movement, the reality show The Hills and the movie Legally Blonde (citing the character Elle Woods as a “personal hero and role model”). These little asides make the book entertaining while delivering the goods.

If there were one thing that I was going to critique A Girl’s Guide to Poker on, it would be the editing. The inaugural champion of the World Series of Poker Europe, Annette Obrestad, is cited for her achievements and influence on the game on a couple of occasions in the book, but her name is stunningly misspelled “Obrestadt.” There are also other grammatical errors (it took me a minute to make sure that “pairor” wasn’t a new word; they actually meant “pair or”), which is surprising considering it was released by D&B Publishing, normally sticklers for such things.

Who Is The Book For? EVERYONE

While it may be titled A Girl’s Guide to Poker – and yes, it does have a definitive feminine feel to it – there is nothing that should keep a guy from reading the book, especially if they are a newcomer to the game. And Botfeld should be looked at as one of the brighter voices of women in the game – she was able to take a bunch of dry information and make it entertaining. That’s commendable in its own right, but it also makes you question why she felt she had to do it.

Botfeld is quite clear on this from the start of the book. “I never set out to write a “women’s” poker book,” she says early on in the tome. But Botfeld fortunately found an art instructor in her youth that demonstrated to her that she could “say anything in life – and proudly said from a woman’s point of view.”

That’s what is lacking in the poker book world, although it hasn’t been from a lack of trying…strong women voices. Two-time European Poker Tour champion Victoria Coren-Mitchell, Susie Isaacs, Maryann Morrison, Cat Hulbert and Toby Bochan have all penned excellent works that Botfeld’s effort is joining (and deservedly so). It shouldn’t be an exclusively “men’s club,” but it shouldn’t mean that a woman has to write differently for it to have an effect.

With this said, Botfeld’s book isn’t just for one genre or the other. The information that Botfeld is giving to people is something that EVERYONE needs to know to be successful in the world of poker. In some ways, Botfeld’s effort even outpaces some more statistically driven works because she takes a different approach to passing the info along, making it palatable and entertaining while educating the reader.

If you’re a newcomer to the game, whoever you are, A Girl’s Guide to Poker is a book that you should have your eyes on. It will help to educate you on several aspects of the game, from bet sizing to putting your opponent on a range of hands (and the reasoning behind it) to bluff catching (yes, Botfeld does step into some more in-depth material in the latter third of the book). But if you’re looking for some entertainment as well, Amanda Botfeld’s A Girl’s Guide to Poker will leave you with a good feeling – and sometimes that’s what we need when we’re getting educated!