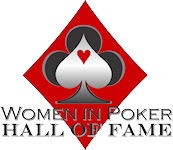 After taking a couple of years away from nominations, the Women in Poker Hall of Fame is back in 2016 to induct a new class of nominees. As the Poker Hall of Fame does, the WiPHoF looks to the general public to nominate players for the prestigious honor of joining the rolls of some of the greatest ladies to have ever graced the felt.

In a change from past years, people who visit the Women in Poker Hall of Fame website to nominate potential candidates will have the opportunity to name two people. Previous to this year, it was limited to one candidate per e-mail address. With the extra candidate listing, it is possible that the Women’s Hall can put together a solid list of candidates that might be utilized in the future for candidacy.

The final two (and a third one that isn’t mentioned) are a bit questionable. The nominees must be approved by a “committee of the Board of Directors and the previous Inductees of the Women in Poker Hall of Fame” (not quite sure why the Board of Directors or the previous inductees would disqualify a nominee if they meet the qualifications). Second, the nominee must “agree to the terms and conditions of the Women in Poker Hall of Fame” (once again, if they meet the qualification guidelines, I don’t think they’ll rock the boat too much once inducted; this rule seems a bit petty). Finally – and this is an interesting one – there is no rule on the books that indicate that a WOMAN has to be nominated to be in the Women in Poker Hall of Fame.

The person nominating the candidates will have to offer a brief paragraph as to the reasons that a person should be nominated. Mentioning the potential nominee’s achievements in the game or what they have added to the world of poker is what is required here, but this should be fairly easy for some of the more qualified women out there who haven’t made the Women in Poker Hall of Fame as of yet.

At the top of that list has to be two-time European Poker Tour champion Victoria Coren-Mitchell. The only player in the twelve-year history of the EPT to ever win two Main Event crowns, Coren-Mitchell has also been one of the preeminent ambassadors of the game as a television presenter throughout Europe and has written about the game extensively in both newspapers and in literature (her book For Richer, For Poorer is one of the best autobiographies in the poker world). The WiPHoF would be greatly amiss if it didn’t put “Queen” Victoria in a prominent place in its annals.

A second choice would harken back to the early days of poker itself. Betty Carey was one of the first women to journey to the felt against the “big boys” during the 1970s and 1980s, often playing in the World Series of Poker and in the largest cash games around. It would be a nod to the history of the game of poker if the WiPHoF were to induct someone from the past into its rolls, something that seems to get overlooked in our rapidly changing world overall and especially in the poker world.

The new nominees to the Women in Poker Hall of Fame will join a list of luminaries that truly embody the excellence of women in the game of poker. The inaugural class of Poker Hall of Famers Barbara Enright and Linda Johnson and Marsha Waggoner and Susie Isaacs (2008) have since been joined by such players as Cyndi Violette (2009), 2015 Poker Hall of Fame inductee Jennifer Harman and Kathy Liebert (2010), Kristy Gazes (2011), J. J. Liu (2012) and Allyn Jaffrey Shulman (2013) and industry insiders as Phyllis Caro (2011), Kathy Raymond (2012) and Deborah Giardina (2013). The new inductees will be enshrined on July 5th in ceremonies that will be held at a location that has yet to be announced.