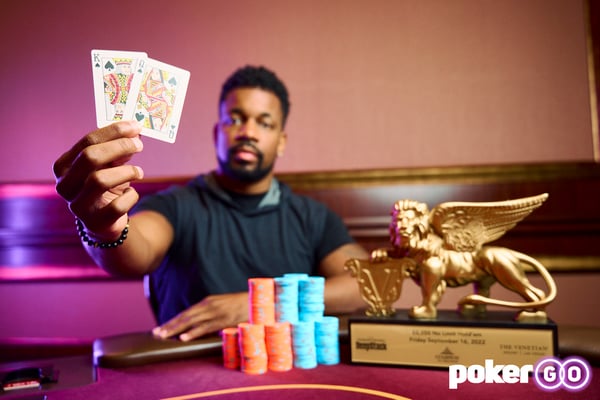 It started off with Michael Wang, who already has two Stairway to Millions II trophies on his mantle, leading the way. Wang would not be around in the end, however, as Andre Butler defeated previous STM II victor Francis Anderson from picking up his second victory of the series. With the win, Butler captured a $60,945 payday and will advance onwards with a seat to Event #10, the $15,000 buy in No Limit Hold’em tournament that begins today.

Who Will Stop Wang?

At the start of the day on Friday, the big question was “Who will stop Michael Wang?” Wang, who went back-to-back in Events #5 and #6, was atop the standings of the five men left in this $5000 buy in tournament. It was a freeroll for Wang, as by virtue of his previous wins that earned him a seat, but he played as if he had his last dollar on the line. Holding 1.875 million chips, Wang was vastly ahead of the field that consisted of Stephen Song (915K), Butler (560K), Anderson (460K), and the short-stacked Adam Hendrix (390K).

The players wasted little time in getting their chips into action. On the first hand of action, Song opened the betting from under the gun and Anderson, in the big blind, woke up with pocket tens and moved all-in over Song’s bet. Song was more than happy to make the call, showing his pocket Aces for battle, and they would hold up over the King high board. Instead of getting a much-needed double through the second stack at the table, Anderson was out in fifth place.

Song would be the beneficiary of another all in on the next hand. Hendrix popped the betting to 40K from under the gun after Anderson’s departure, and Song would make the call out of the big blind. A 7-3-Q flop saw Song check his option but, after Hendrix fired a continuation bet, Song would nearly triple it to 90K.

Hendrix immediately moved his remaining stack to the center and Song nearly beat him there with his call as the cards went to their backs:

The flop had cruelly (for Hendrix) brought two pair for Song, who now only needed to dodge one of the two cowboys in the deck or any sort of counterfeiting running cards. A six on the turn left Hendrix looking for one of five outs – the three remaining treys in the deck (which would give him a better two pair) or the two red Kings. The river was a red paint card, but it was the Queen, giving Song an unnecessary full house and the knockout of Hendrix in fourth place.

In only two hands, the field was down to three players, with the added chips from Hendrix and Anderson’s stacks into Song’s giving him the chip lead. That would be a momentary phenomenon, however, as Wang pushed all in on the river of a 9-8-6-4-9 board and Song could not find a call. The 700K chip pot was pushed over to Wang as he retook the lead.

Now it was time for Butler to come to life, cutting some chips from both Song and Wang to become the first player to top the two million mark in chips. Butler continued to torment his tablemates, chipping away at their stacks, before he took out Wang in third place to set up the heads-up showdown with Song holding more than a 3:1 lead. Although they would play heads up poker for about a half-hour, it was too much for Song to overcome.

On the final hand, Song limped in to see a cheap flop, but Butler would not hear of it. He raised the bet to 115K, and Song pushed for his remaining million chips. Butler called and saw that he had the worse end of the deal:

A Queen in the window on a Q-8-7 flop flipped the script and put Butler into the lead, leaving Song wanting for one of three Aces in the deck. A Jack on the turn opened some doors to a Broadway straight for Song to stay alive, but the 6♦ on the river crushed those dreams and earned Andre Butler the Event #8 victory.