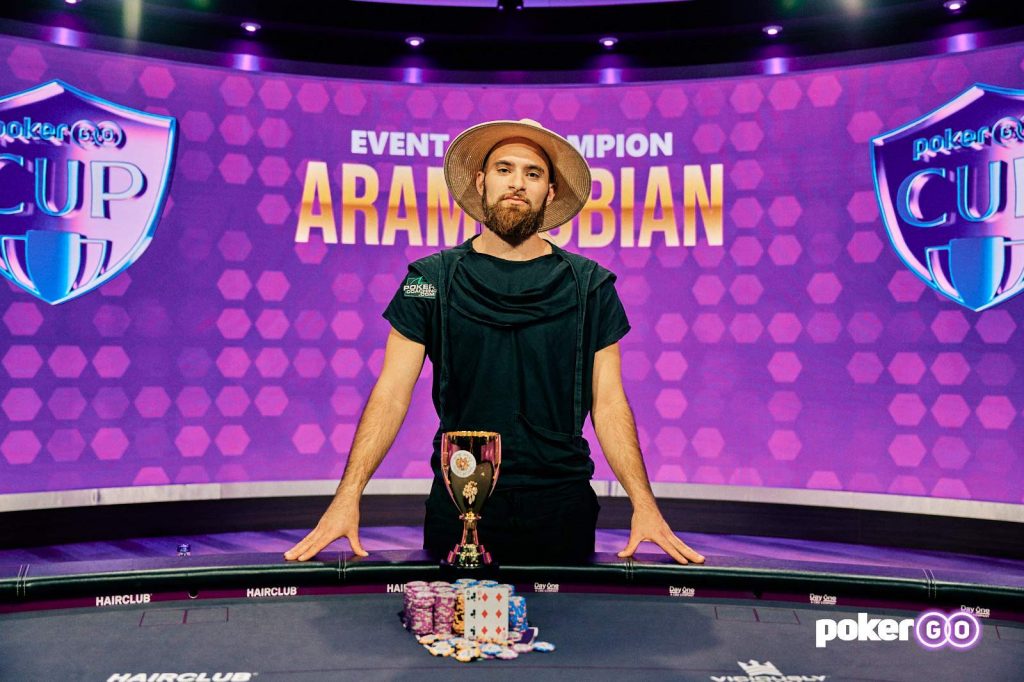 The game is easy when you start with the lead! Aram Zobian was in the lead at the start of the final day of Event #2, a $10,000 buy-in No Limit Hold’em tournament, at this year’s PokerGO Cup and he did not waste it. He would outlast Kristen Foxen and Punnat Punsri to capture the title, earn a nice six-figure score, and thrust himself into the overall race for the PokerGO Cup.

At the start of Day Two action, Zobian had a decent lead over the field. His 3.495 million chip stack dwarfed that of Foxen’s 2.16 million, and she held a slight lead over Punsri’s 1.9 million stack. Rounding out the six-handed final table were Seth Davies (1.28 million), Andrew Moreno (950K), and Cary Katz (590K), the only player to make the final table in the first two events of the PokerGO Cup.

Holding such a paltry stack, Katz was in “double up or go home” mode from the start. In the big blind at the start, Katz would wait until he was under the gun to push in for his final chips. Only Punsri would take the bait and, pre-flop at least, Katz was in decent shape. His A♠ 10♠ was in a dominant position over Punsri’s A-9 off-suit, and the 7-5-2 flop brought no danger. However, a nine on the turn flipped the script and had Katz looking for a saving card. When the river blanked with a pairing seven, Katz was out in sixth place as Punsri moved up the standings.

Punsri would not slow down after dismissing Katz from the table. He would knock out Moreno (rivering a flush against Moreno’s top pair) in fifth and Davies in fourth (with a dominant pocket pair of Aces over Davies’ pocket deuces) to take over the lead. Zobian looked to draw even but, even after knocking off Foxen in third place, Zobian went to the heads-up battle at a million chip plus disadvantage to Punsri.

With such deep stacks, the duo would parry for a lengthy period. In that duel, Zobian was able to bleed some chips from the Punsri stack to take back the lead. It would lead to a final hand clash that saw Zobian capture the championship.

On the final hand, Punsri limped in with a weak Ace (A-7), which allowed Zobian to simply check his 8-6 and see the flop. That flop hit Zobian squarely – 8-8-7 – while also giving Punsri two pair and an Ace kicker. After Zobian checked, Punsri put out a bet and Zobian raised the action, which Punsri called.

The turn deuce did not help anyone, but it did not slow down anyone either. Surprisingly, Zobian checked again and Punsri obliged him with another bet, which Zobian raised for a second time. Punsri called to see another deuce hit the river.

With two pair on the board, Zobian (holding the winning full house) pumped the pot with an all-in that would put Punsri at risk for elimination. After a great deal of thought, Punsri came to the wrong decision and made the call, only to see that Zobian had been in charge after the flop and rode the hand to the title.

It may be too early to look at this, but Event #1 champion Sean Winter is the overall leader in the race to capture the PokerGO Cup. The points that Winter earned for his title (216) eked out the lead over Event #2 champion Zobian (208) to put Winter in the overall lead. In an intriguing situation, the family Foxen – Alex and Kristen – both find themselves in the Top Ten after the first two events; that should make for interesting discussions around the breakfast table!

(* – only player with two final tables in first two events)

Event #3 of the PokerGO Cup, another $10,000 No Limit Hold’em tournament, is down to its final table for Saturday’s play. Beginning at noon (Pacific Time), Philip Shing will lead the players to the felt with his 4.455 million in chips. There are some familiar names in the pack chasing him, including three players who are in the Top Ten overall standings (Kristen Foxen, Katz, and Mateos). Rounding out that final table will be Nick Schulman and Ed Sebesta, and the eventual champion will put their name in the mix for the overall PokerGO Cup title.