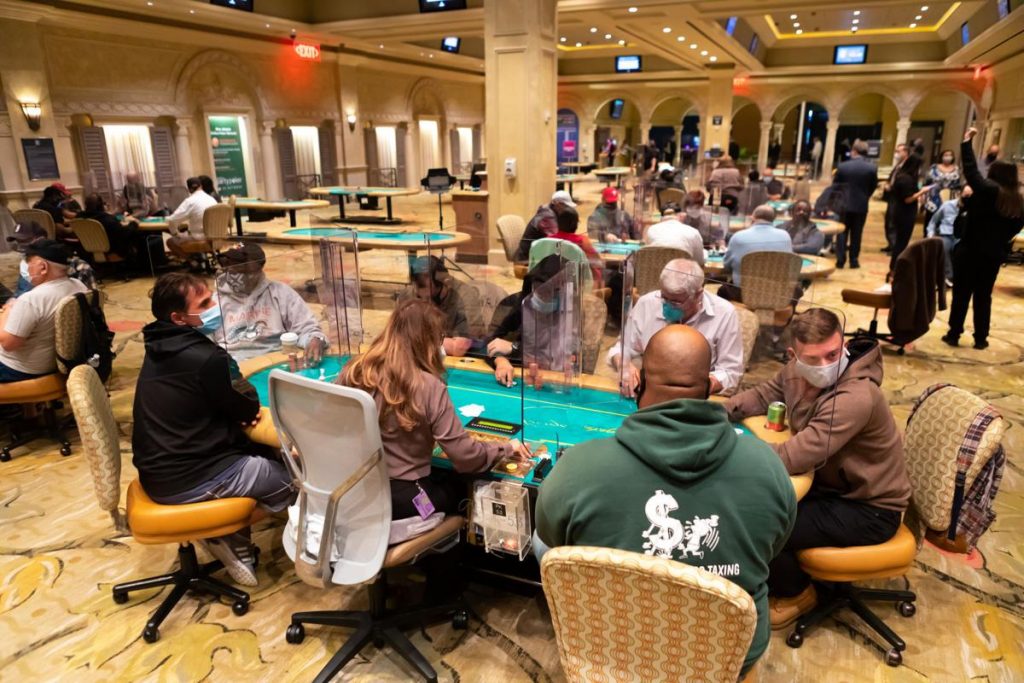 For an inaugural tournament, it is going to go down in history. Marking their return to the tournament poker arena, the Borgata’s “The Return” series has turned out to be a phenomenally successful way to kick off the 2023 tournament poker season. The guarantee was crushed as the final total came to over $5 million and, after Day Two, it looks as if Bin Weng will be the person in a prime position to reap the benefits of that mound of cash.

After the number crunchers at the Borgata were through processing the 1142 $5000 entries that were received in “The Return,” the final numbers were released at the start of the Day Two proceedings. The field generated a $5,538,700 prize pool, well exceeding the $3 million guarantee that had been put on the tournament. 110 players will divvy up that stack, with a min-cash in the event doubling the buy-in (unless someone fired multiple bullets) and earning the player a $10,413 payday.

The final table is where things get interesting. The entirety of the nine-handed final table will receive a six-figure cash and a new line on their Hendon Mob resume. The top two slots will exceed half a million dollars, with second place earning a nice consolation prize of $720,031. The eventual champion was supposed to get a guaranteed $1 million payday – but that was upped to $1,206,097 after the final numbers were determined.

The 369 players who returned for action on Friday immediately got to work determining who would be the recipient of money for their trip to New Jersey. In a big clash in the early going, Jacob Ferro found a double up through Michael Wang when Ferro’s pocket Queens saw Wang three-bet and all-in shoved his pocket sevens. The board did not bring the saving seven for Wang and he quickly found himself on fumes while Ferro shot up the leaderboard with his 213K in chips.

The early action would also see new contenders emerge from the crowd. Mukul Pahuja was one of those new names atop the standings after grinding his stack north of the 600K mark within a couple of hours of the opening bell. Although he would see go to John Pannucci when Pahuja could not find a call on a Q-Q-7-J flop and turn, Pahuja was quite healthy with his 595K in chips (although Pannucci was right behind him with his 585K stack).

The dinner break came, but the popping of the money bubble did not. After the players came back from feasting, there were some unfortunate departures from the tournament. Asher Conniff was one of those after clashing with Blake Bohn in a classic race. Conniff’s pocket tens led Bohn’s A-J pre-flop, but Conniff could not dodge an Ace on the turn that gave Bohn the hand and knocked him out of the tournament.

The bubble would pop in another race situation. In this one, Tomasz Zakrzewski was all-in for his single 1000 chip and only Dan Zack would stick around to see what he had. It was a good battle, with Zakrzewski holding pocket Jacks at an excellent time against Zack’s A-10, but an Ace in the window ended any drama. A ten on the turn only made it worse and, after the river blanked, Zakrzewski was out of “The Return” and Zack was over 1.43 million in chips.

Pop the Bubble, Pay Out the Cash

With the popping of the money bubble, the cash started flowing out of the Borgata. Taylor von Kriegenbergh was the first to take the minimum payday, with Tony Sinishtaj, Darren Elias, and Joey Weissman following soon afterward. Bin Weng, however, did not have his eyes on the minimum money – he set his sights on the upper reaches of the leaderboard as the clock ticked down to only 53 players remaining by the end of the evening:

Lurking behind Weng and these players is former World Champion Joseph McKeehen (950,000), the aforementioned Pahuja (760,000), and Anthony Zinno (475,000). Zack suffered a significant fall after being amongst the leaders and he will start Saturday’s Day Three action as the short stack (135,000) in the tournament.

Play will resume in “The Return” at noon today in the lovely confines of the Borgata poker room. Plans are for the tournament to whittle down to the final nine players, who will then come back on Sunday to determine the first major tournament champion of the 2023 season.