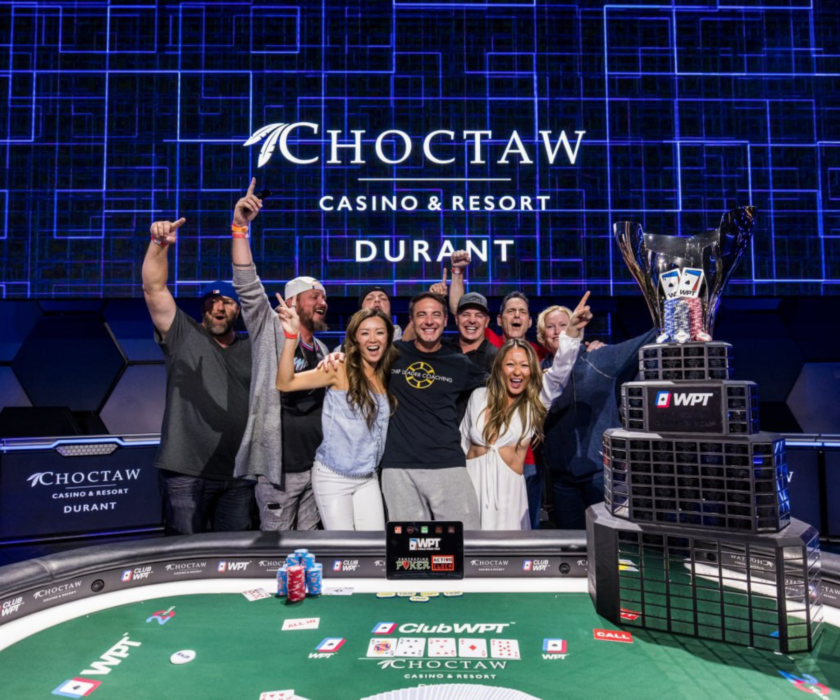 With everyone in town for the start of the 2022 World Series of Poker next week, the World Poker Tour thought it would be a clever idea to finish some leftover events from earlier in 2022. Those two events, the 2022 WPT Seminole Hard Rock Poker Showdown and the 2022 WPT Choctaw, were completed this weekend. In both tournaments, there was the chance for some history.

All eyes in the HyperX eSports Arena were on Darren Elias at the start of the final table of the WPT Seminole Hard Rock Poker Showdown. Stacked with 38.825 million in chips, Elias was in the hunt for his record-extending fifth WPT title, but he had Davis and his 26.55 million to contend with. The remainder of the table – Viet Vo (11.925 million), Marcos Exterkotter (10.9 million), Mike Laufer (6.75 million), and Andrew Barfield (5.5 million) – had their work cut out for them if they were going to get into contention.

Those four men bringing up the tail end of the leaderboard never had a chance. Only six hands into play, Davis took out Laufer in sixth place when he caught an Ace to pair up against Laufer’s pocket treys. Sensing that Davis was drawing closer, Elias began to grind the chips out of the opposition to the point where he had more than half the chips in play only 30 hands into the day.

Davis would not go away, however. He was responsible for taking down Barfield in fifth, but Elias would eliminate Vo in fourth to reestablish his dominance. Once Elias took out Exterkotter in third, he held more than 63% of the chips on the table and after only 53 hands of action.

The heads-up match was where the real battle began. The duo quietly dueled back and forth in the early match, with Davis slowly creeping up behind the four-time WPT champion. By the time the 100th hand of the final table took place, the duo were virtually equal in chips with no end in sight.

On Hand 112, the fortunes changed. On a Q-5-4-4-7 board and with more than 10 million in chips in the pot, Davis turned up an A-7 to best Elias’ better A-10 to take over the lead for the first time. Although Elias would fight back to squeak into the lead, on Hand 145 Davis picked off a huge bluff from Elias with only a King high (Elias did not show) on a J-8-2-8-2 board to take a commanding lead.

Five hands later, it was over. After Davis limped in and Elias checked, the Q-8-5 flop brought a check from Elias, a bet from Davis, and a call from Elias. A ten on the turn saw Elias go on the attack, but it was the wrong moment; Davis quickly called the 9.3 million bet and tabled an 8-5 for a flopped two pair against the open-ended straight draw of Elias (9-7). Needing to dodge a Jack or a six, Davis saw a seven fall on the river to give him the hand and the championship.

Although he started the day as one of the chip leaders in the event, it was still a strenuous test for Chance Kornuth. His chip stack would rollercoaster throughout the day before finally reaching the top – and his first WPT title – in knocking off Steve Buckner to take home the WPT Champions’ Cup.

Kornuth was well stacked to start the day with 9.025 million chips, but he was looking up at a tough competitor in the chip leader, Ray Quartomy (9.4 million). Add into the fact that James Hundt (nine million) was right behind him – and players like James Mackey (5.05 million), Buckner (4.7 million) and Kristen Foxen (nee Bicknell, 2.175 million) – and nothing was set in stone for any of the competitors in the HyperX Arena.

Hundt drew first blood at the final table, taking out Mackey in sixth place and assuming the lead in one swing. That would not last long, however, as a clash between Quartomy and Kornuth saw Kornuth emerge on the other side to slide into the lead over Mackey. Kornuth kept his foot on the gas, dispatching Foxen from the tournament in fifth place, to extend his lead to almost five million chips.

By the time that Buckner eliminated Hundt in fourth place, Kornuth (26.675 million) had more than twice the chips of his two competitors, Quartomy (7.475 million) and Buckner (5.2 million), combined. Kornuth continued to put the pressure on his opponents, wearing down their stacks. This was particularly effective against Quartomy, whom Kornuth eliminated in third place in a pocket pair battle (Jacks for Kornuth, fives for Quartomy).

Going to heads up action, Kornuth had a 2.8 to 1 edge over Buckner and it looked like the final table would end quickly. Instead, Buckner put on a display of short stack poker that was excellent, fighting back to equalize the stacks on Hand 91 and taking over the lead two hands later. Over the next 30 hands, however, Kornuth fought back to get his lead back at more than the ratio when they started.

But the tournament was not over yet. Now it was Buckner’s turn to fight back and he would, knocking Kornuth down to only two million chips at one point. Amazingly, Kornuth rose off the canvas by steadily chipping away at the stack of Buckner. On Hand 148, Kornuth got a key double through Buckner when he went runner-runner to catch Kings up against Buckner’s paired Jack.

The very next hand, Kornuth would retake the lead. Ten hands later, however, Buckner would double through Kornuth to snatch the lead back. The back and forth continued for another 40 hands before the blinds began to catch up with two combatants.

On the final hand, Buckner dropped his chips to the center and Kornuth immediately called. Buckner had been hoping to just steal the blinds with his move, because his 9-6 off suit was not the best hand to go to battle with. It was live, though, as Kornuth tabled his A-10 to lead the way preflop. A K-5-5 flop kept Kornuth in the lead and the Ace on the turn sealed the deal. Once an innocuous 9♦ fell on the river, the tournament was over, and Chance Kornuth was the champion of the WPT Choctaw.