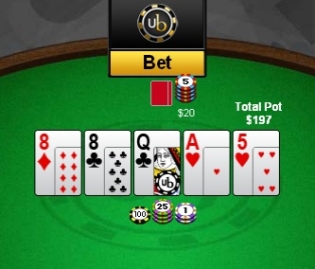 Although it happened over half a decade ago, the “superuser” scandal at Ultimate Bet still has the attention of the online poker community. Recently released audiotapes of discussion of that sordid part of online poker’s past have now surfaced, which will reignite the controversy all over again.

Today, LegalPokerSites.com’s John Mehaffey published those audiotapes that were released by Travis Makar. Makar, who has maintained his innocence regarding the scandal after the Kahnawake Gaming Commission (KGC) named him as one of the conspirators, released a bounty of information regarding the case, including screen shots and recordings of meetings, in which he alleges that several prominent persons involved in Ultimate Bet were responsible for the cover up of the situation. In those files there is damaging evidence on several people that have been or are still a part of the gaming community.

Another conspirator in the KGC report, former World Champion and former Ultimate Bet owner Russ Hamilton, is featured prominently in the audiotapes discussing the issue. In those tapes, he admits to using the “God Mode” that allowed a player to see their opponents hole cards to steal between $16 million to $18 million. As the tapes continue to roll, Hamilton and UB personnel discuss how to “limit” the liability for the site.

Mehaffey indicates that there are several prominent members of the online gaming community (even now) that knew about the Superuser Scandal at UB. Such names as Greg Pierson (the founder and Chief Executive Officer of UB and Iovation, the company that is providing player verification in Nevada’s intra-state online poker network), UB attorney Dan Friedberg, former UB CEO Jim Ryan (who was also co-CEO of bwin.Party until earlier this year), former KGC head and owner of Tokwiro Enterprises Joe Norton and Paul Leggett (who was at the helm of CEREUS before “Black Friday” and now leads the online arm of Amaya Gaming) are all prominently mentioned as culprits in the scandal.

The two professional poker players who were the face of Ultimate Bet also earned mention in the audiotapes. It is alleged that Annie Duke knew of the “God Mode” accounts and had a copy, but did not use it to swindle players as it was on a time delay. Duke’s former teammate at Ultimate Bet, 13-time WSOP bracelet winner Phil Hellmuth, is mentioned in the tapes but it is indicated that he should be “kept in the dark” about the situation. It is mentioned that this should be done to protect Hellmuth, but the conspirators also acknowledge that they weren’t sure what Hellmuth would do if he knew the full story.

The tapes also discuss the amounts of money that certain players lost. During the conversation, it is revealed that poker pro Prahlad Friedman was taken for $360,000 and actor Ben Affleck was down a half million dollars, much of it to Hamilton by his admission. In fact, Iovation is alleged to have created software that allowed Hamilton and others to be informed of when Affleck was on the site.

Discussion of paying back the players affected by the scandal was prominently featured also. In the tapes, Hamilton is the “final arbiter” of who would get paid back. In that discussion, Hamilton sets the criteria; players who had quit playing on Ultimate Bet were wouldn’t get a refund, players that owed Hamilton money (in his mind, at least) and players that Hamilton just “didn’t like” would not be paid back. Poker pro Freddy Deeb is mentioned in this account, with Hamilton stating that Deeb “didn’t deserve” a refund because the money stolen from Deeb was in return for Hamilton staking him in live tournaments. According to Mehaffey, Hamilton justified it further by saying it was done for marketing purposes.

The newly released information will definitely open up the old wounds of the Ultimate Bet Superuser Scandal. What remains to be seen is how it will affect the poker community today and, in particular, the intra-state online poker industry in Nevada that is still in its infancy.