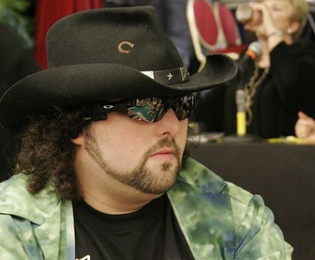 Georgia-based poker pro David Bach leads a field of 142 heading into Day 6 of the World Series of Poker Main Event. Bach, best known for winning the $50,000 H.O.R.S.E. Championship in 2009, more than quadrupled his stack on “Moving Day” as the field was trimmed down from 378 Saturday.

Bach survived elimination late on Day 4 when he won a massive all-in confrontation against Team PokerStars Pro Vanessa Rousso. With the board reading 10h-9s-6c, Back checked and Joe “floes” Serock led out with a bet of 25,000. Rousso raised to 50,000 and Bach tanked for nearly three minutes before moving all in for 450,000 total. Serock folded and Rousso thought for a couple minutes before calling with pocket sixes for bottom set. Bach tabled Qh-Jh for an open-ended straight draw, and it didn’t take long for him to take the lead. The 8h fell on the turn, giving Bach a straight, and the 3s on the river secured a pot worth nearly 1 million. Rousso was left short stacked and Bach sent her to the rail with pocket aces a few hands later.

He continued to increase his stack on Day 5 with the help of a timely suckout against Germany’s Max “HotKarlMC” Heinzelmann late in the evening. Heinzelmann opened the action with a raise to 40,000, Bach three-bet to 120,000, and Heinzelmann moved all-in for 800,000 total. Bach quickly called with Kd-Ks, but Heinzelmann showed Ah-As and was in great position to double up. The flop brought Qs-9d-7d, giving Bach a flush draw, and the 3d on the river completed his flush to eliminate the online superstar and push Bach to the top of the leaderboard.

Bach holds a slim lead over Pius Heinz, who bagged up 4,699,000 chips Saturday night. Kyle Johnson, Phil “USCPhildo” Collins, and Ben “benba” Lamb round out the top five, all taking more than 4 million chips into Day 6. Lamb, who won his first bracelet during the 2011 WSOP and added two other final tables, needs to finish 138th or better to take over the WSOP Player of the Year lead from Phil Hellmuth.

Daniel Negreanu, Freddy Deeb, Jon “PearlJammer” Turner, Kevin “BeL0WaB0Ve” Saul, Joe Tehan, Jon Friedberg, Darus Suharto, “Miami John” Cernuto, Matt Stout, and Martin De Knijff were among the players sent packing on Day 5. Negreanu was eliminated after moving all in preflop with pocket tens and coming up short against the Ad-7d of Rupert Elder. An ace fell on the turn and Negreanu left the featured table to the applause of the crowd.

Play will resume at noon PST Sunday as the remaining 142 players inch closer to that coveted seat at the WSOP Main Event final table. Here’s a look at the top 10 stacks as well as some of the notables heading into Day 6: