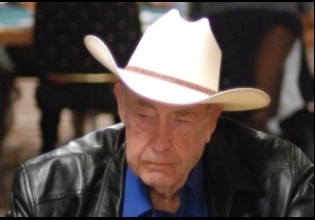 The $10,000 Main Event of the 2011 World Series of Poker (WSOP) is set to launch this week, but despite the thousands of players expected to compete, the electric atmosphere, and all the pomp and circumstance that comes with the biggest poker tournament in the world, there will be a noticeable void at the Rio this year.  Doyle Brunson will not be in attendance.

“The Godfather of Poker,” arguably the most famous poker player of all-time and one of eighteen living members of the Poker Hall of Fame, announced early Monday morning that he will be sitting out the No-Limit Hold’em World Championship this year, tweeting, “No main event for me.”  In the same post, he took a jab at the United States Department of Justice for its actions against online poker, adding, “maybe the DOJ will stake me.”

Despite that staking comment, the reason for Brunson’s decision is not likely to be a lack of bankroll, assuming a tweet later in the day is true.  Responding to a flood of comments, Brunson said, “Tx for all the tweets about my skipping the main event. It’s not about money, I’ve lost a lot of passion for the game since Black Friday.”

In addition to the Black Friday frustration, Brunson may be a bit upset about his recent WSOP performance, as he has not had a successful WSOP, failing to cash in any event for the second year in a row.  His final tournament this year was the $50,000 Poker Player’s Championship, in which he busted out during Day 2.  Showing obvious frustration, he tweeted, “Busted… Total nightmare… Goodbye WSOP.”

Shortly thereafter, Brunson made his official Twitter announcement regarding his decision to not play in the Main Event.

Sheer fatigue could also be a factor.  A single, prolonged day playing in a tournament at the World Series of Poker is exhausting for even the most spry poker players, but for a soon-to-be 78-year old, the idea of possibly playing for eight days if all goes well can be downright intimidating.

That said, it’s not like Brunson hasn’t had any success in big tournaments in the last several years.  He placed 24th in May’s World Poker Tour (WPT) Championship, 18th in last December’s WPT event that bear’s his name (2010 Doyle Brunson Five Diamond World Poker Classic), 17th in the 2009 WSOP-Europe Main Event, and made the final table in the 2009 WSOP Seven Card Stud Hi/Lo event.

And, of course, as most poker fans know, Doyle Brunson has won ten WSOP gold bracelets, tied with Johnny Chan for second all-time, just one behind Phil Hellmuth.  His last bracelet was won in 2005, when he took down the $5,000 Short Handed No-Limit Hold’em event.  He started his bracelet run by winning five from 1976 through 1978, including back-to-back Main Event championships in 1976 and 1977.

Over the weekend, Brunson even stated that he might be done with major live tournaments altogether.  Two days before his WSOP announcement, he posted on Twitter, “…you might be watching my last tournament. If I don’t play well (up to my standards), I may retire from tournament poker.”

There is no indication, however, that “Texas Dolly” will stop playing cash games.  In fact, he responded to a Twitter follower by saying that he was not quitting live poker.

All told, Brunson has won over $6 million in his live tournament career, placing him 39th on the all-time money list once invitationals and buy-ins of more than $50,000 are excluded.