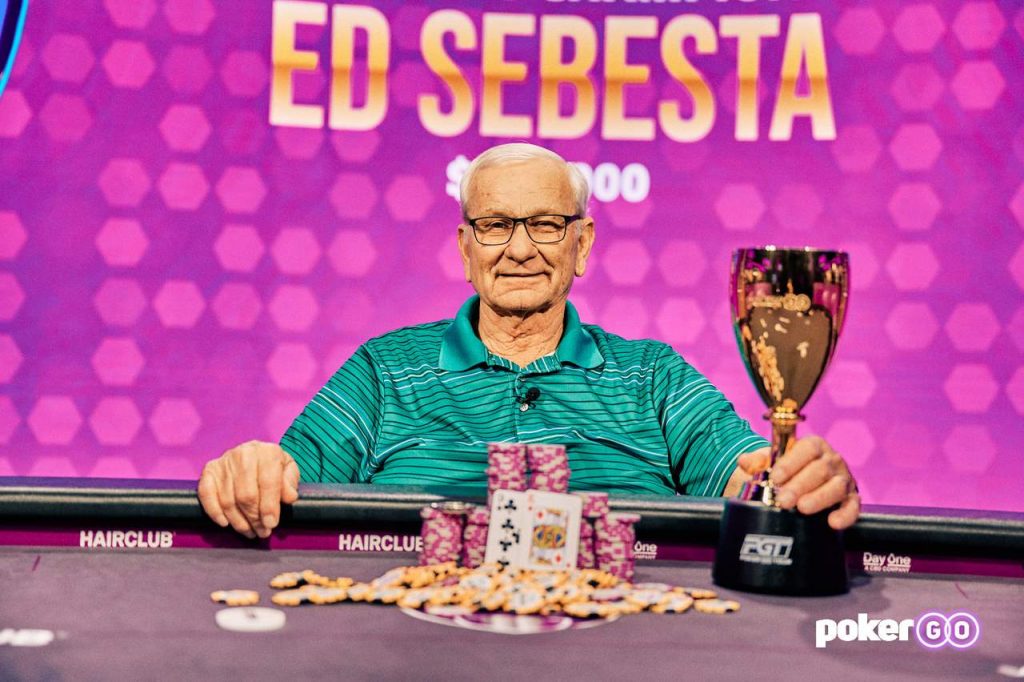 The 2023 PokerGO Cup took a well-deserved day off on Sunday, but that does not mean that Saturday was free of action. In Event #3, veteran Ed Sebesta surprised a smattering of pros at the table to capture the title, while the final table was determined in Event #4. Both tournaments were $10,000 buy-in events, as the first two events had been, and it has led to a tie atop the overall PokerGO Cup standings.

In Event #3, Phillip Shing was far and away the tournament leader at the start of Day Two, but the pursuers chasing him were tightly packed and looking to take him down. Sebesta held the second slot on the six-player final table with his 1.755 million in chips, while Cary Katz (1.61 million), Nick Schulman (1.56 million), and Adrian Mateos (1.52 million) looked to be his challengers.

The final player of that final table did not last but the first hand. Stacked with only 350,000 in chips, Kristen Foxen was all in on the first hand with pocket Jacks, only to see Katz’s pocket eights run out a diamond four-flush to send her out of the tournament. Soon afterward, Mateos was eliminated in a blind versus blind battle after he called an all-in from Shing; Mateos’ pocket tens were run down by a flopped Ace for Shing’s A-8.

Down to four, Katz would fall victim to Sebesta after taking a bit of a risk with a flush draw. Sebesta called Katz’s all-in with top pair and, over the turn and river, Katz failed to fill his flush. After Sebesta knocked off start-of-day chip leader Shing in third place, he would go to heads-up action against Schulman with a 4:1 lead and never look back.

The final hand would see the money hit the center with Schulman calling a Sebesta all-in with a middling A-7. It was the right move, at least pre-flop, as Sebesta had been pushing his luck with only a K-9 for battle. The flop did not change anything, but the King on the turn put Sebesta into the lead. After he dodged the three Aces that Schulman wanted to see, Sebesta was the champion of the third event on the 2023 PokerGO Cup schedule.

Event #4 Final Table to Play Monday, Tie on Top of the Leaderboard

76 players came out on Saturday to play in the final $10,000 buy-in tournament on the 2023 PokerGO Cup schedule, and it saw a little drop in numbers. Only 78 entries were received for the tournament, far below the 90 that came out for Events #1 and #3 and the 83 entries for Event #2. However, the tournament still awards points toward the PokerGO Cup, so the players there looked to maximize their potential take.

Some familiar faces will return to the felt Monday to determine the champion. Leading the way is Anthony Hu with a 3.38 million stack, but Poker Hall of Famer Erik Seidel is stalking him with his 2.1 million in chips. Not far off the two leaders are the M&M boys – Andrew Moreno (1.72 million) and Adrian Mateos (1.03 million). Rounding out the final table, which will continue at noon Monday, are Justin Saliba (830K) and Calvin Lee (690K).

As for the overall PokerGO Cup leaderboard, Sebesta and Event #1 champion Sean Winter are tied atop the standings. Because both men’s events had the same number of players, they won the same amount of money (the tiebreaker) and, thus, neither has the advantage. Only three players in the Top Ten on the leaderboard – Cary Katz, Kristen Foxen, and Adrian Mateos – have been to more than one final table.

With three tournaments in the books, here’s how the leaderboard stands: