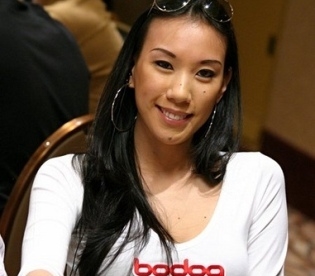 In an announcement over her Twitter account, poker pro Evelyn Ng announced that her longtime sponsor Bodog has re-upped her deal and she will remain as the face of the site.

On Wednesday afternoon, Ng excitedly Tweeted the news to her 10,000-plus followers. In a simple statement prior to the beginning of action at the European Poker Tour stop in San Remo, Italy, Ng chirped, “I am thrilled to announce that I’ve renewed my sponsorship agreement with Bodog!” Ng is in San Remo taking part in Day 1B along with her paramour, fellow poker pro Lex “RaSZi” Veldhuis.

With the signing of a new deal, Ng continues as the longest tenured pro on Team Bodog. Last year, Bodog dropped 2004 World Series of Poker (WSOP) runner-up David Williams from its roster just after his win in the World Poker Tour (WPT) Championship last April and signed online pro Amanda Musumeci. Ng and Musumeci are the only two players on Team Bodog at this point.

Some have questioned the credentials that Ng and Musumeci bring to the table to have earned their respective sponsorships. Between July 2008 and July 2010, Ng had no cashes in any tournament worldwide according to the HendonMob database. Her 238th place finish in the 2008 WSOP Main Event was followed by two dry years before she came back to cash in the 2010 WSOP Ladies Event (29th place) and the Main Event (445th place). According to the HendonMob, Musumeci has no live tournament cashes, but has approximately $172,000 in online winnings.

The announcement of the new deal between Ng and Bodog will not set off a firestorm of future signings, however. The activities of Black Friday would seem to have squelched any future poker sponsorship deals from the major players in the online poker industry for the foreseeable future, especially for pros from the United States. The indictments by the U.S. Department of Justice have already had an effect on sponsored players, as seen at the start of yesterday’s WPT stop in Hollywood, Florida.

The WPT’s Seminole Hard Rock Showdown began yesterday, drawing a strong field of 426 players out for the $10,000 event. While there were several top pros in the fray, most notably absent from the festivities were Team Full Tilt members Howard Lederer, Phil Ivey, Allen Cunningham, and Jennifer Harman. Team UB’s Joe Sebok was also missing from the action and PokerStars was represented by one lone member of its Pro stable, Jason Mercier (un-patched at the tournament).

The field at the WPT tournament did have some players sporting their allegiances, however. Full Tilt pros patched up during the event included Gavin Smith, Annette Obrestad, Scott Montgomery, and Andrew “luckychewy” Lichtenberger. Adam “Roothlus” Levy carried the UB flag, although Maria Ho was in attendance for the tournament without adornment by UB. Several sites that still accept U.S. action, including Lock Poker (Matt Stout), Victory Poker (Jonathan Little), and DoylesRoom (Amit Makhija and Steve Gross), displayed their logos proudly.