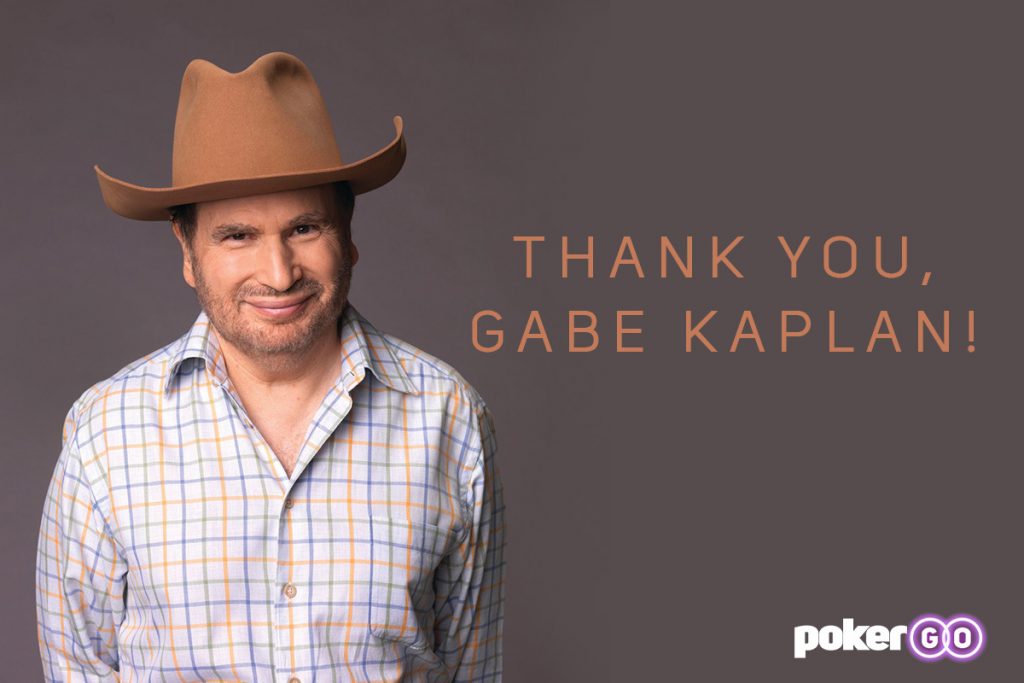 Famed actor and poker enthusiast Gabe Kaplan has retired as commentator on High Stakes Poker after one episode in Season 10. PokerGO announced Kaplan’s decision on Wednesday, saying that his replacement, to work with A.J. Benza, will be named when the second episode airs next week.

Kaplan’s final episode was Tuesday, January 24, but PokerGO will rebroadcast it on its YouTube channel on Friday, January 27 at noon ET. Of course, PokerGO subscribers can always pull up episodes on demand.

“I had a blast doing High Stakes Poker, but the time has come for me to hang it up and empty my locker,” said Gabe Kaplan in Tuesday’s announcement. “I want to thank A.J, Mori and all the staff, players dealers and viewers. We had sixteen years of good times and now memories.”

Mori Eskandani, President of PokerGO, called Kaplan’s impact on the poker world “nothing short of legendary.”

“His genuine and unmatched enthusiasm for the game was evident from the first day of filming and never wavered in the more than 100 episodes that Gabe was a part of,” Eskandani added. “He brought the world of high-stakes poker into millions of homes worldwide and did so by seamlessly intertwining his one-of-a-kind comedic wit and expansive knowledge of the game. Without Gabe, High Stakes Poker wouldn’t have reached the incredible heights it has achieved. Gabe will be greatly missed, and we wish him nothing but the best in retirement.”

A.J. Benza, Kaplan’s long-time partner in the High Stakes Poker booth, said, “Working with Gabe Kaplan was a highlight of my career. Playing the straight man to his unbelievable comedic timing was precious. Not to mention learning poker at his knee. We had a great run and that’s why you never bet against two guys from Brooklyn.”

A long history in poker

Kaplan and Benza hosted the show for its first five seasons, dating back to 2006. Kara Scott replaced Benza in season six. Season seven was the only one without either Kaplan or Benza, as the late, great comedian Norm Macdonald took Kaplan’s spot. Both Kaplan and Benza returned for season eight and have been together ever since, until now.

The 77-year-old Kaplan is clearly best known for his stand-up comedy and acting careers and specifically his role as Gabe Kotter in the hit 1970’s sitcom Welcome Back, Kotter, which also starred John Travolta.

He has been a poker fan for decades, making his first appearance at the World Series of Poker in 1978. In those days, well before the poker boom of the internet age, Gabe Kaplan was known as one of the best poker players around, winning Amarillo Slim’s Super Bowl of Poker in 1980 and making the final table two more times in the next five years.

Kaplan finished 13th in the WSOP Main Event in 1991 and has multiple final table finishes in other WSOP events, including ninth place in the $50,000 HORSE event in 2007 and a runner-up finish in the $5,000 Limit Hold’em event in 2005. He also has a World Poker Tour final table to his name.

The best of both of Kaplan’s worlds merged in 2007, when he appeared in a supporting role in the improvisational poker comedy The Grand, playing the father of two star poker players, portrayed by Cheryl Hines and David Cross.