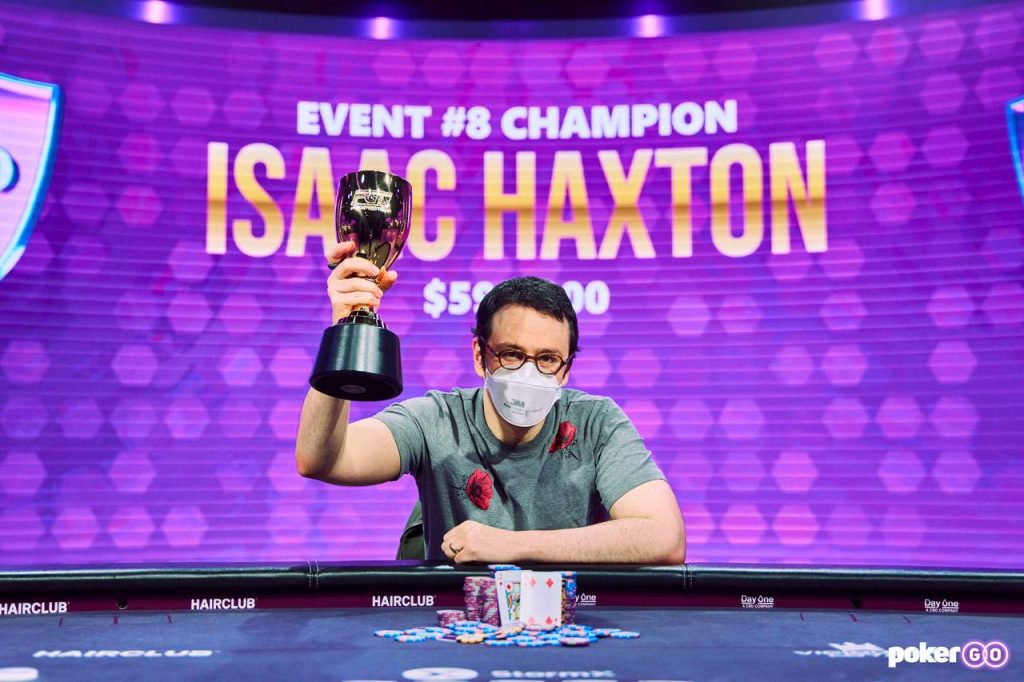 Friday night was the conclusion of the 2023 PokerGO Cup, but there was plenty still on the line. The four men who made the final table of the Main Event were there to divvy up the $1.3 million prize pool. There was also the trivial matter of the overall champion of the PokerGO Cup, who would take the title and a $50,000 bonus; four men were also in contention for that as the cards hit the air in Event #8.

He was the only player who had not found a cash yet in the 2023 PokerGO Cup schedule, but Isaac Haxton wasn’t going to let this run go to waste. He led the quartet of men to the final table, holding a 300K chip lead over Cary Katz. Joining both those players over the million-chip mark was Daniel Colpoys, while Sean Winter (who won Event #1 of this schedule what seems like eons ago) was the short stack with only 555,000 to go to battle with.

The first departure was a surprising one. Colpoys would see much of his stack flow across the table to Winter after Winter caught a King for his K-Q against Colpoys A-Q. Haxton would finish off Colpoys in a classic race situation, Haxton’s A♠ 5♠ finding an Ace against Colpoys’ pocket nines, and it would end Colpoys tournament in fourth place.

Even though he was the beneficiary of most of Colpoys’ chips, it was not enough to push Winter any further. Haxton took all but 5000 of Winter’s chips when he crafted a straight against the Event #1 champion, and Winter would hit the exits on the very next hand in third place.

Down to heads up, the title was up for grabs but the overall champion had been determined (more on this in a moment). The duo of Haxton and Katz would battle it out for a prolonged period, but it just seemed that the magic was with Haxton on this day. On the final hand, Haxton put Katz to the test with an all-in push with a J♦ 4♦ and Katz responded with a call while holding K-7 off suit. A Jack on the flop pushed Haxton to the lead, one he would not relinquish, as Haxton earned the Main Event title of the 2023 PokerGO Cup.

No Wins, But an Overall Championship

There were four men with a chance of winning the overall PokerGO Cup championship when the Main Event final table started. Anthony Hu was in the lead, but his departure as the bubble boy in Event #8 meant that he was not going to add any more points to his total. All he could do was watch as three men at that final table – Katz, Winter, and Colpoys – battled it out for the right to pass him.

For Winter and Colpoys, they would have to win the tournament to be able to earn enough points to capture the overall championship. Katz had a couple of different routes to the title, however. By winning the Main Event, Katz could easily pass Hu and earn the overall championship. He could finish second also, but he needed Haxton (and not Colpoys or Winter) to win the Main Event.

As we have recounted, Katz did the latter. He cashed in five events (counting the Main Event), but he did not win any singular tournament on the eight-event slate. Katz would earn 218 points for the runner-up finish in the Main Event and, combined with the 242 that he had earned in his other four finishes, totaled 460 points overall. That was barely enough to eclipse Hu, who would come up just short with his 454 points over his three cashes and one title.

By capturing the overall championship, Katz earns the special Player of the Series PokerGO Cup and a $50,000 bonus.

The conclusion of the PokerGO Cup will give the players a chance to relax before the next battle on the PokerGO Tour. Coming up in February, the PGT will attempt a unique tournament series of mixed game play with a High Roller buy-in. Starting on February 2, the PGT Mixed Game series will have several $10,000 buy-in tournaments for such disciplines as H.O.R.S.E., Triple Draw, and a Dealer’s Choice event. It will be a test of the strength of the mixed game format and whether it can draw out the “High Rollers” in particular.