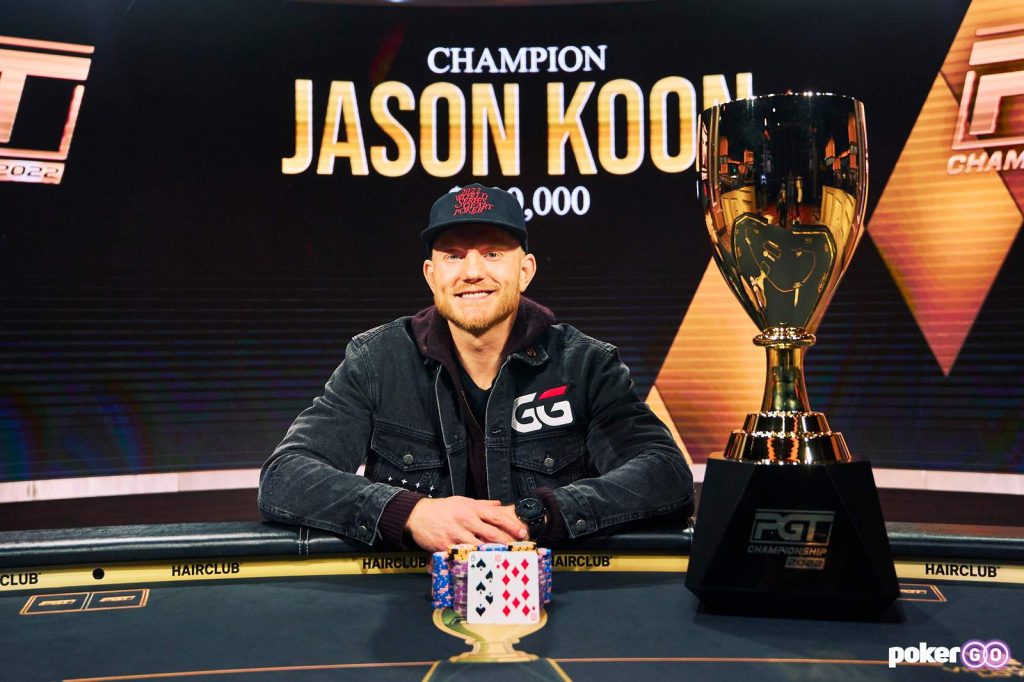 The inaugural PokerGO Tour Championship is in the books and, after the first day, they probably should have stopped the action on the mercy rule. Jason Koon ravaged the field on Day One, amassing a stack that approached two million chips (while everyone else was nearly 1.5 million behind). Koon would ride that chip stack to victory in the invitation-only event that closes out the 2022 PokerGO Tour season.

The PokerGO Tour Championship was a unique concept in that it was a 21-player event that only welcomed the top points getters from the past twelve months. To give those players who were atop the standings a bit of an advantage, they were given a larger chip stack than the other players. It was much like what the Professional Golf Association (PGA) of America does with the FedEx Championship event, where the players’ scores are weighted on how they did during the competition leading to the finale.

Using the PokerGO system (points earned during the season translate to starting chips), it meant that Stephen Chidwick was sitting atop the standings with 342,000 in chips to start the action on Wednesday. He was followed by the men who came behind him in the standings – Phil Ivey (second, 309K), Koon (284K), Michael Duek (240K), and Sean Winter (237K). This continued onward on down to Benny Glaser, who used his big run at the World Poker Tour World Championship to eke his way into the tournament (165K).

Although 21 players were eligible for the tournament, there were some “no-shows” for the winner-take-all freeroll worth $500,000 to the champion. Fifteen of the 21 players were on the felt for action on Wednesday, while players such as Adrian Attenborough, Paul Phua, Daniel Dvoress, Danny Tang, Duek, and Ivey chose not to take part in the event. Still, the fifteen men fought hard for the big prize offered and the prestige of being the biggest “High Roller” of them all.

From the start, Koon showed that he meant business on the PokerGO felt. He was able to get Sam Greenwood to lay down a hand post flop that punched his stack up over his starting level, then took chips from both World Series of Poker World Champion Espen Jorstad and Daniel Negreanu. Two hands from Day One catapulted Koon to the top of the standings, however.

On the first, Koon saw a 4-7-K rainbow flop against Chidwick with 125K in the center of the felt. Koon led from the small blind and Chidwick, in the big, made a call. A deuce on the turn saw both men slow it down, but a Queen on the river brought another bet from Koon, this time for only 60K. It was the right bet, however, as Chidwick called and mucked after Koon unveiled an A-Q for a rivered pair.

One hand later, Koon would take down Jeremy Ausmus. With a board of Q-8♥ K♥ 6♥ 10, Ausmus pushed his remaining 200K or so in chips and Koon was more than happy to look him up. Ausmus saw the reason why quickly; after showing an A♥ 4x for absolutely nothing, Koon showed a 9♥ 7♥ for the flush, the win, and a chip stack close to 900K.

Koon would double that stack on the way to the final six players, holding more than half the chips in play (1.829 million) when Day Two began on Thursday. Chad Eveslage (347K) and Sean Winter (322K) were his closest threats – if you could call them that – while Nick Petrangelo (285K), Glaser (283K), and Chidwick (152K) rounded out the final six. With the only thing mattering was finishing first, the five men beneath Koon had their work cut out for them.

They took a shot at taking Koon down, however. Eveslage would fall to Petrangelo surprisingly in sixth place, while Chidwick’s time ended in fifth at the hands of Koon. Winter quickly made it three-handed when he took out Glaser in fourth, then eliminated Petrangelo in third to take a lead over Koon. The duo would battle for two more hours before the final hand played out.

Koon continued with his aggressive play from throughout the tournament, shoving pre-flop and Winter would make the call. With only a 10-8, Koon was looking to steal a blind from Winter (J-8). A ten on the flop would change things, pushing Koon into the lead, while Winter looked for a Jack to save him. That knave never came; a trey on the turn and a second trey on the river kept Koon in the lead and earned him the title of 2022 PokerGO Tour Champion.