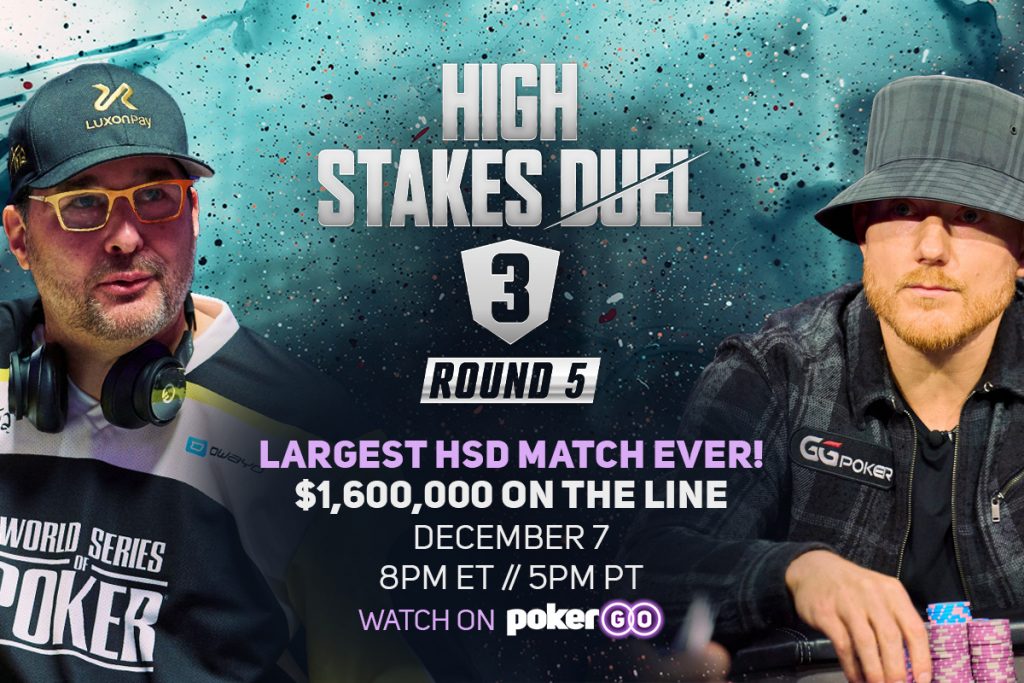 In August, Phil Hellmuth and Scott Seiver were set to face off against each other in the richest battle ever seen on PokerGO’s “High Stakes Duel III,” but a couple weeks before the match, Seiver withdrew for undisclosed personal reasons. On Tuesday, PokerGO announced that a new challenger has stepped in to challenge Hellmuth for heads-up supremacy and a $1.6 million prize pool: Jason Koon.

Hellmuth and Koon will compete at the PokerGO Studio in Las Vegas next week, December 7 at 8:00pm ET. Each will put $800,000 on the line, winner take all. The show has never seen stakes this high.

Each edition of “High Stakes Duel” starts with stakes of $50,000 per player, or $100,000 total, in Round 1. The loser of the contest has the option for a rematch at double the stakes. Stakes continue to double each round. If the loser bows out, another challenger can take their place within a 30-day window. If nobody wants to challenge the winner, High Stakes Duel ends.

In Round 1, the winner is obligated to accept the rematch if offered. If the winner begins a winning streak in Rounds 1-3, they must win three matches in a row before being allowed to decline a rematch. If a winning streak is started in Round 4 or later, the champ only needs to win two in a row to retire.

Hellmuth is king of the hill

Hellmuth then beat sports pundit Nick Wright in the first round of “High Stakes Duel III.” Wright wisely did not call for a rematch, but Tom Dwan took his place for Round 2, in which each player put up $100,000. Dwan served Hellmuth his first and only defeat, starting his own winning streak. Hellmuth opted for the rematch and got his revenge, beating Dwan in Round 3, where the prize pool was $400,000.

Dwan called it a day at that point, but Scott Seiver took his place, so it was Seiver versus Hellmuth for $800,000 total in Round 4. Hellmuth won that round, too, setting up a rematch for Round 5 and the $1.6 million prize pool.

That rematch was scheduled for August 22, but in early August, Seiver backed out for “personal reasons.”

It is now well past the 30-day window for a new challenger to step in, but we don’t know if PokerGO a) extended the window because of the unforeseen circumstances, or b) Koon did step forward in time and they just delayed an announcement until the match date was set.

Because Phil Hellmuth began his current winning streak in Round 3, he can opt to quit if he wins Round 5 against Koon. A sixth round would require a $1.6 million buy-in from each player.