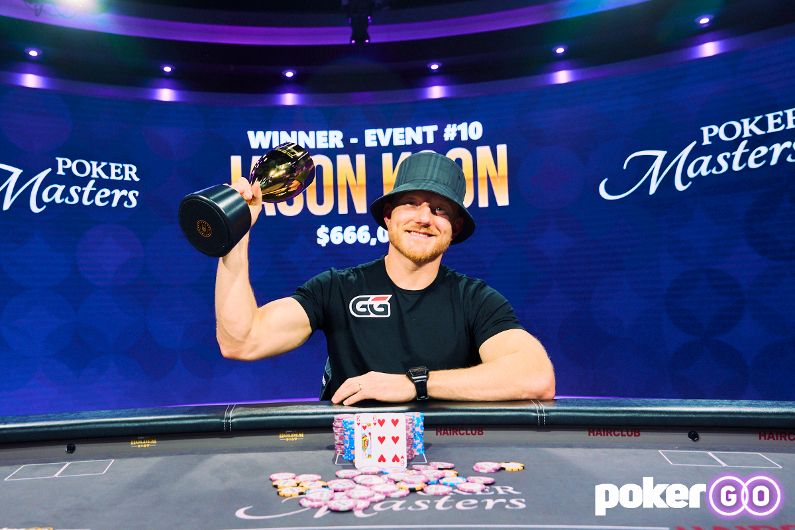 Jason Koon shows up when it counts

The 2022 Poker Masters wrapped up on Monday, as Jason Koon took home the trophy in the tenth and final event, $50,000 No-Limit Hold’em. For the victory, Koon won the devilish sum of $666,000, taking his lifetime live tournament earnings to over $40 million.

Perhaps shockingly, that only puts him seventh on the all-time money list, still well behind the first place Justin Bonomo, who has $57.7 million in winnings. A couple decades ago, these sums would be virtually unheard of, but in this age of constant super high roller events, players can hit eight figures without having to grind their entire lives.

“I haven’t played many tournaments, but I guess the ones I have played have gone pretty good,” Koon told PokerGO afterward. “I’ve played a lot less and hung out with my family, but when I’ve come to play I’ve really been focused and I feel like I’ve played some of my best poker this year.”

In his career, Koon has played in loads of tournaments, but this year his schedule has been a little lighter. As he said, though, he has made those cashes count. Of his 17 cashes in 2022 (all since early April), all but two have been for at least six figures, with one topping $1.8 million.

Since the Poker Masters Event #10 had just 37 entries, it paid to only six spots. Of course, the high price tag also meant that although Koon didn’t have to beat many people to win, nearly every seat was filled by an ultra-skilled, seasoned pro.

Take Monday’s Day 2 field, for example. Here were the seven players that started the day, in the order in which they finished: Jason Koon, Adrian Mateos, Scott Seiver, Erik Seidel, Seth Davies, Mikita Badziakouski, and Daniel Negreanu. That’s two Hall of Famers and some others that might get there some day. Hell, the least recognizable name to many poker fans is probably Badziakouski, and he sits just behind Phil Ivey at tenth on the all-time money list.

Unfortunately for Daniel Negreanu, despite making the top seven, he needed to finish one spot higher to make the money. He had his pocket Aces cracked by Seth Davies’ pocket Jacks to meet his tournament demise.

In the meantime, despite not playing Monday, the outcome of the proceedings was of great interest to Sean Winter. He was leading the race for the Poker Masters Championship going in to Event #10, with 466 points. Both Davies and Seidel, though, still had a chance to catch him, despite sitting outside of the top ten on the leaderboard.

Seidel finished fourth in the tournament and Davies fifth, neither spot of which earned enough points to push them past Winter.

And thus Sean Winter won the championship and the Purple Jacket, along with a $50,000 bonus. He nabbed the title on the strength of two late events, finishing second in Event #7 for 207 points and winning Event #9 for 259 points.