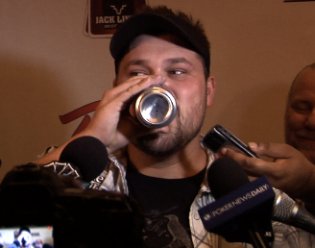 Wow. That’s the only word I can use to describe what’s happened so far in the 2010 World Series of Poker (WSOP) Main Event final table. In the latest “OMG” moment from the finale of the $10,000 buy-in spectacular, Bluefire Poker instructor Jason Senti was knocked out in seventh place at the hands of Joseph Cheong.

Senti was all-in with Big Slick against Cheong’s pocket tens before the flop. Senti rose from his chair, turned to the crowd, and threw his hands into the air to get his supporters riled up. The first three cards were K-K-Q, giving “PBJaxx” trip kings and sending his rail into a frenzy. The turn was a jack, giving Cheong a straight draw, which came through on the river when a nine hit. The crowd, fresh off witnessing other premium flopped hands go down in smoke, was shocked.

Senti made his way to the bustout interview area, only to be handed a Miller Lite halfway through his speech, which Senti proceeded to open and take a swig from. His fans surrounded the assembled media with thunderous chants of “PB-Jaxx” and Senti was extremely affable during his interviews. You would never know he was just knocked out from one of the largest poker tournaments ever held. His seventh place finish was worth nearly $1.4 million, not too bad for his second in the money finish in a major live tournament according to the Hendon Mob database.

Senti stated that players like Phil “OMGClayAiken” Galfond and Annette “Annette_15” Obrestad served as his mentors down the stretch. The former is a staple of high-stakes cash games both online and offline, while Obrestad took down the very first WSOP Europe Main Event.

Cheong shot up to 46 million chips following his execution of Senti. Meanwhile, Mizrachi holds the chip lead with 65 million, nearly the same amount as Jonathan Duhamel had to start the final table 10 hours ago. Also noteworthy is that Filippo Candio has added sunglasses to his wardrobe. He’s armed with a Dario Minieri-esque scarf as well. Maybe scarves are a staple of Italian poker players.

You can still hear cheers from Senti’s camp coming from the corridor leading to the Penn and Teller Theater lobby. Tournament Director Jack Effel joked to the crowd that Elvis might be in the building after Senti’s group screamed loudly during a hand. A post-Main Event party for the Senti clan appeared to be in the works and, with the poker pro already having a Miller Lite in his system, we can only assume that many more cervezas will follow.

Keep it tuned to Poker News Daily for the latest from the Penn and Teller Theater in Las Vegas, the site of the 2010 WSOP Main Event final table.