The setting of the live three hour Celebrity Apprentice finale was the American Museum of Natural History in New York City. The competition began on March 1st with 16 contestants, eight men and eight women. Ten weeks later, Rivers emerged as its champion. After West Coast Choppers CEO Jesse James and Playboy Playmate of the Year Brande Roderick were fired last week, Rivers and Duke returned to their suite in Trump Towers. The duo was anything but pleasant to each other, with Rivers summing the mood up, “I think you’re really smart. I think you’re going to be fabulous competition, but we don’t have to be best friends.”

The task was to host a VIP party and silent auction featuring celebrity experiences. Teams were asked to incorporate a Limited Edition Celebrity Apprentice Kodak digital picture frame and also sell tickets to the Cirque du Soleil show Wintuk. Duke and Rivers would be judged on five criteria – the amount of money raised, level of Kodak product integration, level of charity integration, the celebrities in attendance, and the overall guest experience. Rivers dubbed the battle “good versus evil” and Duke made it a goal to raise $500,000. The Ultimate Bet pro commented, “I want to beat Joan Rivers with an exclamation point. Unless she raises $700,000, I know I’m going to win.” 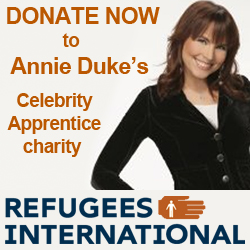 After both teams had met with Kodak executives, Duke immediately put her cell phone to work, calling fellow poker pro Perry Friedman, who had already appeared on two episodes during the second season of Celebrity Apprentice. Duke commented, “The fact that Joan Rivers called all poker players ‘white trash’ helps me because I can call up my poker player friends and say, ‘I’m playing against Joan Rivers and guess what she said about you?’” Friedman offered to donate $20,000 to the cause.

Rivers also got on the horn, telling one prospective donor, “I’m doing the Celebrity Apprentice and it’s between me and a girl who’s the biggest piece of shit in the world.” At the same time, she quickly grew tired of her assigned event planner, as a lack of vision allegedly led to the event planning company pulling out of the Celebrity Apprentice finale. Meanwhile, Duke, who was seeking to purchase ice sculptures, visited the event planning offices and was promptly shown the exit. She told NBC cameras, “The other team didn’t like them and so the event company has quit. This is fucked up.” The incident occurred after 5:00pm on a Friday, leaving both Rivers and Duke scrambling to organize the massive fundraiser the next day.

Duke lashed because of her predicament, commenting, “Now I’m freaking out because I have a raw space. I can’t believe that because Joan Rivers doesn’t know how to treat another human being, I became collateral damage.” The live studio audience in attendance in New York cheered loudly at the comment. Duke then asserted, “It was war before this happened, but now I am going to crush her like nothing you’ve ever seen.” The WSOP veteran continued to vent her frustration, telling one phone call recipient, “This woman needs to die,” a comment that was later frowned upon by show host Donald Trump during the live boardroom.

Rivers tackled the dilemma of not having an event planning company onboard by turning to her charity for help. The President, CEO, and a bevy of volunteers from God’s Love We Deliver came to the rescue. Duke received a breakthrough of her own when she made contact with an event planner that owned a warehouse full of supplies. She explained, “The number of people who have dropped their lives to come out for me is amazing.”

The morning of the event, Duke left Trump International Hotel and Tower with Green. Duke filled the comedian in on the Celebrity Apprentice gossip since Green was fired in Week 3: “I have been maligned and my character has been assassinated every week. She started attacking me in the most personal way.” Green retorted, “That’s not personal; it’s just a joke.” At the venue, Rivers’ setup involved each guest walking through an oversized Kodak picture frame to bid on auction items such as an Amsale dress, a game-worn Brett Favre jersey, and a necklace worn by Secretary of State Hillary Clinton.

Hellmuth bid on a round of golf with Natalie Gulbis, a former contestant on Celebrity Apprentice who was one of three candidates not to appear at the finale (Khloe Kardashian and Tionne Watkins were the others). He commented, “$25,000 for a round of golf with Natalie? That should get it done.” Rivers commented on those in attendance at Duke’s gala: “Annie has people that have cash stuck in their shoes. I don’t have those people, so if we’re going to win, we’re going to win on all of the other criteria.” Rivers’ event featured “Desperate Housewives” star Kyle MacLachlan, comedian Kathy Griffin, “American Idol” contestant Constantine Maroulis, and the cast of the Broadway hit “Chicago.”

The final boardroom began with Duke defending poker as a game of skill separate from gambling. She explained to Trump, “Poker is a skill game, so you can think of [my friends] as investors.” Trump then inquired, “Poker is also a gamble?” Duke responded, “Less than the stock market.” Referring to Duke, Rivers chimed in, “This is so disgusting. This is everything I did not believe in for 75 years. I’ve lived my life with honor.” She then insinuated that poker players are members of organized crime, noting, “I was told your money is all Mafia money.”

In the end, Rivers’ team raised $150,830 for her charity. Duke tripled that total, recording $465,725. Kodak executives also gave the nod to Duke on charity integration using digital picture frames as well as in-party signage. The other three categories – celebrities in attendance, Kodak integration, and overall guest experience – all were won by Rivers, giving the longtime comedy staple a 3-2 edge. Nevertheless, Duke remained optimistic. The Poker News Daily columnist remarked, “I’m really happy. I came away with really great friends. Charity and friends: That’s what makes the world go round.”

Trump then brought in the winner and runner up of Celebrity Apprentice Season 1, Piers Morgan and Trace Adkins (respectively); both said they would hire Rivers. Rodman and figure skating legend Scott Hamilton, who was fired in Week 2, agreed. Contrastingly, James suggested that Trump hire Duke. Rivers argued that she should be the Celebrity Apprentice because she represents “winning and business in the new way that this country is taking on.” Duke responded, “If it’s about raising money, I did better. If it’s about winning more challenges, I did better.” Donald Trump, Jr. gave his two cents: “As a business person, I really respect that Annie lives and breathes game theory: No emotion; she just makes decisions.”

In the end, however, Rivers was crowned the Celebrity Apprentice for Season 2. The two adversaries embraced after Trump announced his decision. Duke’s charity, Refugees International, received over $700,000 from the NBC reality show, while Rivers’ charity gained over $500,000. Celebrity Apprentice will return in one year for Season 3, its ninth overall.