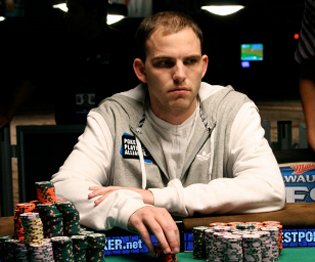 John “JRD312” Dolan hit the rails in the 2010 World Series of Poker (WSOP) Main Event final table in sixth place, taking home $1.8 million. Dolan was all-in before the flop with Q-5 of diamonds and up against the pocket fours belonging to Jonathan Duhamel. Tournament Director Jack Effel, who has been quite boisterous throughout his turn on the mic here at the Penn and Teller Theater, told the crowd, “Dolan needs some help, but he does have two overcards.” The race was on!

The flop came J-7-6, all hearts, and neither player held another card of the suit in their hand. The turn brought the nine of hearts to the board, putting four of the suit in the middle of the table, and Dolan needed an eight, queen, or five to win or a heart to chop. With the entire crowd expecting another dramatic river card, a benign three of clubs hit to send Dolan out in sixth place.

Dolan, like Jason Senti was quite jovial in his bust out interview, telling the media that he’s set to head to Los Angeles for the PokerStars North American Poker Tour (NAPT) Main Event there next week. He’s fresh off a runner-up showing in a preliminary tournament held during the Foxwoods World Poker Finals for $45,000. Dolan told the assembled media, “On the final hand, I didn’t expect it to go either way. It was a coin flip and I lost; that’s the way it goes.”

Dolan’s elimination wasn’t the only recent excitement here in the finale of the 2010 WSOP Main Event. John Racener moved his chips into the middle with A-K and Michael “The Grinder” Mizrachi made the call and tabled A-8 of diamonds. Mizrachi looked quite disappointed to see Racener show down a premium hand and the flop came 2-10-2. Mizrachi needed an eight for a win or a 10 to chop, but a king on the turn left him drawing dead to the river. Racener doubled up again after drawing out on A-K with A-Q after flopping a queen. Duhamel was down to 26 million following the hand, while Racener stood at 40 million in third place.

Eleven-time WSOP bracelet winner and UB.com pro Phil Hellmuth arrived and immediately began jeering with Mike Matusow. An argument as to which pro had more money ensued, although the dispute did not appear to be resolved. Meanwhile, Full Tilt Poker pro Patrik Antonius is on stage railing “The Grinder.” Every time Antonius is shown on the two big screen monitors, the women in the crowd go wild. There’s nothing like a sex symbol in poker.

Play has not slowed down since Dolan’s bust out. Instead, we’ve seen frequent all-in 3bets before the flop. One of the only times a walk has occurred came when Mizrachi held pocket kings, a timely break for everyone at the table.

At the last check of chip counts, here’s how the field stood: