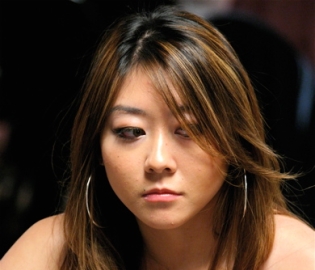 Ho was elated to be joining Team UB, whose roster of pros includes 11-time WSOP bracelet winner Phil Hellmuth and reigning National Heads-Up Poker Championship victor Annie Duke. She told Poker News Daily, “To be a part of Team UB, which boasts a well-respected roster of pros that have achieved so much and stood the test of time in the game such as Phil Hellmuth and Annie Duke, as well as newer pros to the scene that have incredible success and talent such as Eric Baldwin and Adam Levy, is something I am proud of.”

The site has undergone a wealth of changes ever since the Russ Hamilton-led cheating scandal rocked it several years ago. Now, Ultimate Bet has been re-branded as UB.com and currently resides on a new URL. Ho explained, “I am excited about the new vision and direction of UB, especially with the guidance and input of Joe Sebok, who has his finger on the pulse of the poker community at all times.” Sebok has served as the main liaison with players in the aftermath of the scandal while the process of reimbursing patrons and combing through hand histories has occurred.

Ho also told Poker News Daily that she brings unique talents to the table: “I believe that I can bring a fresh and unique dynamic to the team by reaching out to an untapped demographic by writing strategy articles and posting videos in both English and my native language of Mandarin Chinese. I also feel as though my experiences primarily as a live high-stakes cash game player will bring a different perspective to a lesser known part of the poker world that interests people.” Ho originally hails from Taiwan and moved to Los Angeles with her family at age four. She is renown for her Limit poker skills.

Ho gained mainstream exposure through the CBS reality series “Amazing Race” during its 15th cycle. She paired with fellow UB pro and close friend Tiffany Michelle on the series and finished in sixth place. In the team’s final leg, Michelle and Ho were unable to conquer a carnival high striker in the Netherlands and comprised the last all-female team remaining. On her friendship with Michelle, Ho told Poker News Daily, “I get to be on a team with one of my closest friends in poker and life, Tiffany Michelle, which is just another reason among many why I am excited about joining Team UB.”

In addition to the Emmy Award-winning “Amazing Race,” Ho has appeared on television shows like “American Idol” and “Anderson Cooper 360.” Appropriately, she holds a degree from the University of California, San Diego in Communications.

Ho’s first live event as a sponsored pro of UB.com was at this weekend’s PokerStars North American Poker Tour (NAPT) Los Angeles stop. Ho played on Day 1B on Saturday and, as of late Saturday night, was nursing one of the short stacks in the room at 9,500. Ho’s table draw certainly hasn’t helped her case, as her company on Saturday included Faraz “The-Toilet” Jaka, Isaac “westmenloAA” Baron, and Nacho Barbero.

Besides her deep run in the WSOP Main Event three years ago, Ho’s poker resume includes a tenth place finish in the World Poker Tour (WPT) Bellagio Cup in July and five in the money finishes in WSOP events over the last two years.