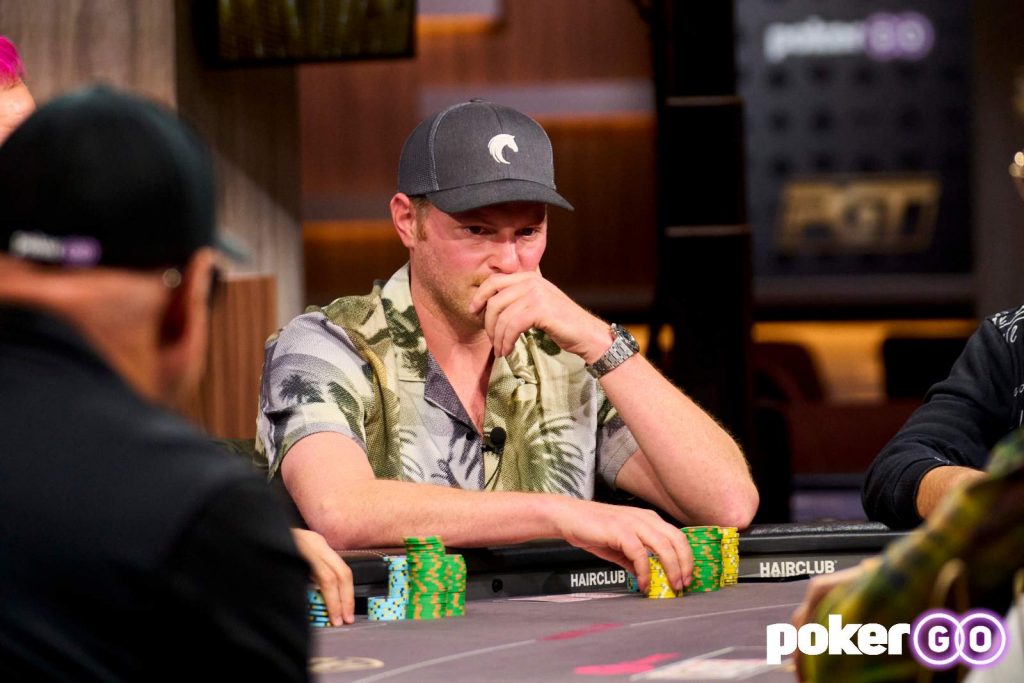 Day Two for the 2022 Super High Roller Bowl is in the books, but the money bubble has yet to be popped. With only four players getting a cash from the tournament, one of the five men left when the final table resumes today will have nothing to show for their efforts. It is highly unlikely that Nick Petrangelo and Daniel Negreanu will be that unfortunate player, however; they sit 1-2 on the leaderboard ahead of the restart this afternoon.

14 Players to Start the Day

Fourteen players came back to start the Day Two proceedings, but one man in particular made himself notable. Seth Davies was quite active in the early hands, finding a double through Petrangelo to get his stack back up over the 300K starting number. It got better for Davies when he was able to eliminate Ben Tollerene from the tournament, his 9-5 making a straight on an 8-7-10-2-6 board against Tollerene’s rivered two pair, tens up with sixes.

Negreanu, who came to the Day Two action with the chip lead, did nothing to damage that status in the early going. He would eliminate Chris Brewer, his A-Q standing tall over Brewer’s A-10, but he would give up some chips in doubling a short-stacked Cary Katz. Still, the Canadian poker legend was able to maintain a substantial lead over Mikita Badziakouski as the play worked its way into the evening.

It took a lengthy period of time before the final table of nine players was even reached. First, Negreanu took care of a pesky Katz in eleventh place, then Badziakouski suffered from some bad luck. He would double up Justin Bonomo in a classic race situation (Bonomo’s A-K versus Badziakouski’s pocket Queens with an Ace on the flop) to sink into the basement of the leaderboard. Left with just scraps, Badziakouski would exit the PokerGO Studios tournament floor in tenth when Paul Jager’s A-10 hit an unnecessary Broadway against Badziakouski’s A-6 on a 3-K-J-8-Q board.

Negreanu Leads the Final Table – For a Bit

When the final nine men came to the table, Negreanu was a wide leader with his 1.804 million in chips. Courtesy of his double through Badziakouski, Bonomo now found himself in the second place slot. Holding down third was Petrangelo, with Andrew Lichtenberger right on his heels. They were the only four men over the million-chip mark, which would prove to be an important feat.

Of the five men that survived the carnage on Thursday night, only one of them – Orpen Kisacikoglu – was able to punch his ticket to the Day Three festivities. He will be a little short on chips when the cards hit the air, however, which Petrangelo and Negreanu lord over the field.

Expect the battle once the final table resumes to be fierce. As stated earlier, only four players will take home prize money from this tournament. That means that one of these men will have worked for two days and their reward will be, as Norman Chad likes to say, ‘SQUADOOSH!’ Here are the prizes that are at stake for these five men:

The cards will hit the air to determine the champion of the 2022 Super High Roller Bowl at noon (Pacific Time) on Friday. PokerGO will be the home for all the action, streaming the final table on a one-hour delay until the champion is crowned. Will it be Petrangelo? Will Negreanu reverse what has been a horrid 2022? Or will one of the trio of short stacks rise to the top? It will all be decided this afternoon in the PokerGO Studios.