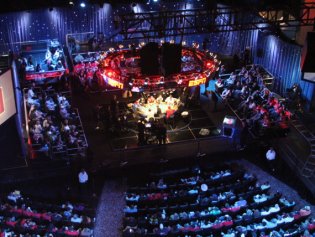 Despite taking second place, Racener was gracious in defeat. He posted on Twitter this afternoon, “Congratulations to Johnathan Duhamel. Still very happy with 2nd place. Would have loved to win it tho. I’ll be back to get it next year.” Racener doubled up early on in heads-up play with pocket queens against Duhamel’s K-4, but could not gain any traction from there.

Also weighing in was fellow Canadian poker player Daniel Negreanu, who, like Duhamel, is a sponsored pro of PokerStars. Negreanu Tweeted, “WSOP spoiler alert: just woke up and saw that PokerStars has now produced 6 of the last 8 WSOP champs and Canada its 1st. Congrats kid!” Negreanu and the rest of the online poker community can now watch the Main Event final table with hole cards tonight on ESPN at 10:00pm ET.

Full Tilt Poker pro Gavin Smith, who was decked out in a blue Toronto Maple Leafs hockey jersey on Monday night at the Rio, commented on Wednesday, “Congrats to Duhamel, and enough with the Canadian shots. Racener is my friend and I have never met Jonathon, besides Leaf fans detest Habs” Smith rooted on Racener in the Main Event and wore his blue hockey jersey to stand out in stark contrast to Duhamel’s fans, who were decked out in red Montreal Canadiens gear.

Also gracious despite not winning the Main Event title was Michael “The Grinder” Mizrachi, the tournament’s fifth place finisher. Mizrachi posted, “Waking up!! Congrats to John Duhamel!!! Well done!! Great game Racener!! It’s all over… Now it’s time to grind!! Next Stop @ Bike in LA.” The PokerStars North American Poker Tour (NAPT) Los Angeles stop at The Bike, whose $5,000 Main Event begins on Friday, will be the landing spot for many in the poker community now that the WSOP has wrapped up.

Racener donated 1% of his winnings to Prevent Cancer, which Tweeted, “Congratulations and thanks to 2nd place winner of #WSOP, John Racener, for pledging 1% of poker winnings last night #2preventcancer!” Ninth place finisher Soi Nguyen also pledged 1% of his earnings to the organization.

Before the Main Event’s conclusion kicked off on Monday night, Erik Seidel and Dan Harrington were inducted into the Poker Hall of Fame. DoylesRoom namesake Doyle Brunson gave the introductory remarks for the former and commented via Twitter that he wasn’t a fan of public speaking. Now, “Texas Dolly” and a host of poker pros are in transit to the Dominican Republic for the Punta Cana Poker Classic. Brunson chirped, “Off to Punta Cana. We got two great pros into the Poker HOF last night. Next year Barry Greenstein goes in. Anybody want to bet no?”

Pulling for Joseph Cheong throughout the Main Event final table was Poker News Daily Guest Columnist Linda Johnson. Cheong wore a patch for Poker Gives and nearly claimed the title, ultimately busting out in third place. Johnson Tweeted on Saturday as play passed the dinner break, “Go Joseph Cheong… He caught a river card he needed, though he did start with best hand.”

On the popular poker forum PocketFives.com, a November Nine sweat thread attracted over 500 responses. Duhamel received a fair share of flak on the site, but one poster defended the first Canadian Main Event winner: “I’m surprised how much hate Duhamel is getting. Mostly from him beating Affleck, but hey sh!t happens in poker. So far from what I’ve seen/read, I think Duhamel played a great FT. Overall it was a great FT! It’s a shame Cheong or Mizrachi didn’t make it HU, but I think Racener played a great short stack when it was 7 handed to make it HU.” Racener is a longtime PocketFives.com member.