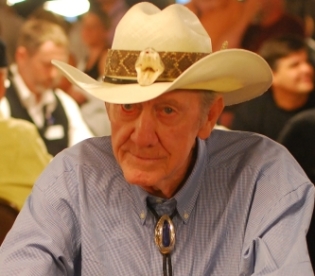 In saddening news from the state of Texas this morning, 1972 World Series of Poker Championship Event victor, four-time WSOP bracelet winner and Poker Hall of Fame member “Amarillo Slim” Preston has passed away after a lengthy illness. The legend of the poker world was 83 years old.

Last weekend, Preston was entered into hospice care, battling cancer and heart problems. Buoyed by several friends in the poker community, including his old “road gambler” running mate Doyle Brunson, Preston seemed to improve over the past week. The announcement of his passing was provided to poker player Scott Clark, who also stated that full details regarding the passing of a poker legend would come later today from the family.

Born Thomas Austin Preston, Jr., in Arkansas in 1928, the man who would become “Amarillo Slim” was known for his propensity to make outlandish prop bets as well as his tremendous skills on the felt. Joining up with Brunson and another former World Champion-to-be, Brian “Sailor” Roberts, the trio would tour the Southwest as the original Texas “road gamblers,” traveling to poker games to make a living. Although the trio would eventually break up their partnership (after they lost their bankroll in Las Vegas, a story told by Brunson in several arenas), they would continue to remain friends and earn their legends during the early years of the World Series of Poker.

“Amarillo Slim” first earned attention during the 1972 WSOP Main Event, taking down the championship for his first ever bracelet. He was able to parlay that victory into a celebrity status, appearing on talk shows including The Tonight Show and movies to promote the game of poker. He would also continue to excel on the tables, taking three more WSOP bracelets, with his last victory coming in 1990 in a $5000 Pot Limit Omaha tournament.

Preston was also very influential in other poker endeavors. He was responsible for several poker books, including Amarillo Slim’s Play Poker To Win. One of his most popular literary efforts was his autobiography, Amarillo Slim In A World Full Of Fat People, which he detailed his career on the tables and with his prop bets. As recently as 2007, Preston released an e-book co-written with Joe Brent Riley.

“Amarillo Slim” also played host to the Super Bowl of Poker which, at the time, was one of the biggest tournaments around until it cancellation in 1991. That tournament was won by actor/poker player Gabe Kaplan on one occasion and accounted for three of poker legend Stu Ungar’s ten career victories.

Over the span of his tournament poker career, Preston was able to cash in tournaments around the world. On the WSOP stage, “Amarillo Slim” was able to cash eleven times, with his most recent cash coming in 2007 in the Seniors Event, and was still racking up those cashes as late as 2009, when he finished in fourth place in an event on the Venetian Deep Stack Extravaganza schedule. Overall, the career earnings for Preston may not be impressive ($587,568, according to the Hendon Mob database), but his overall impact on the game of poker might arguably only be rivaled by Chris Moneymaker’s historic 2003 WSOP Championship victory.

Comments regarding Preston’s passing have poured in across social media. Poker pro Bernard Lee simply stated, “RIP Amarillo Slim, one of the first poker superstars,” over his Twitter feed. Brunson himself recounted a story on his personal blog of a robbery the twosome had gone through in the early 1960s, while others paused for a moment in memory of one of poker’s all-time greats.

Poker News Daily would like to pass along our condolences to the Preston family during this saddening time.

UPDATE: The Preston family has released a statement through Nolan Dalla, the Media Director for the WSOP, stating the following:

“We hope everyone will remember our beloved Amarillo Slim for all the positive things he did for poker and to popularize his favorite game – Texas Hold’em.”