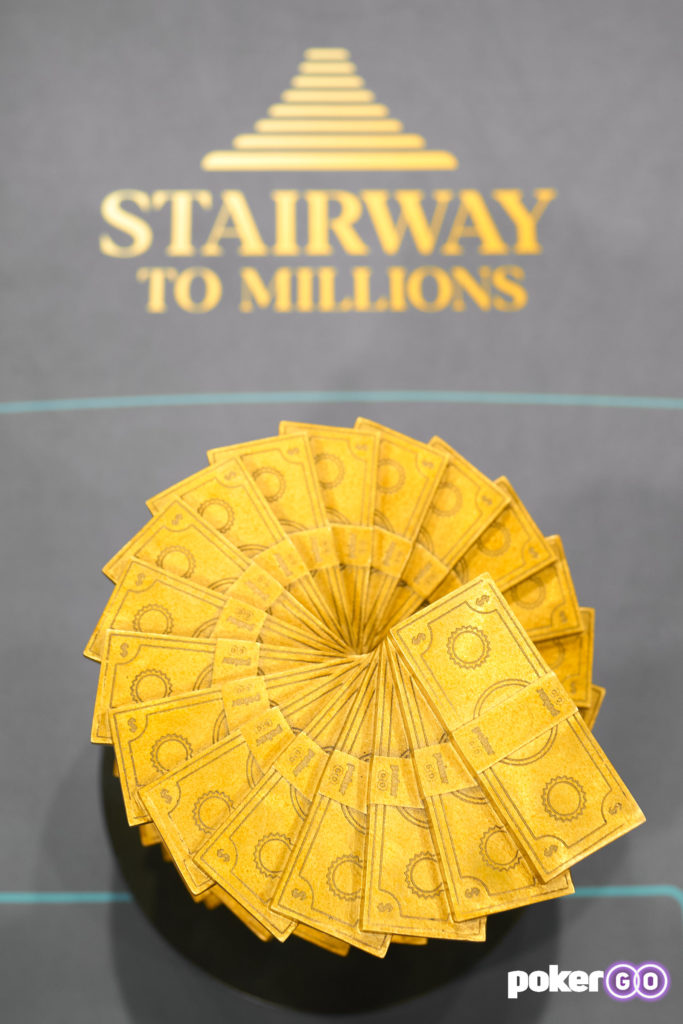 It may not seem like it in some areas of the country, but we’re moving closer to the autumnal season and cooler weather. As such, people start to move indoors for their entertainment activities, and the streaming channel PokerGO is looking to provide a month of poker entertainment for its fans and subscribers. Beginning on September 8, three of PokerGO’s most popular “made for streaming” programming will return and will be broadcast on the channel’s platform.

First Up – Stairway to Millions II

September brings back a tournament series that PokerGO debuted earlier in 2022. The Stairway to Millions was a series that presented a format that was familiar to many online players, the Steps concept. The first tournament started with a small buy in, and each subsequent tournament increased in entry fee. Those who finished well in the smaller buy in tournaments were guaranteed seats in the next event of the tournament schedule, which built towards a climactic finale.

Back in January, PokerGO experimented with this format in what was an eight-tournament series. Starting with a buy-in of $1000, the ladder went up from there to a $2000 tournament, then to a $4000 event, and so on. The finale of the roster of tournaments was the $100,000 buy in “Main Event,” which saw Nick Petrangelo defeat David Peters to take the lion’s share ($1,026,000) of the $1.9 million prize pool (Sean Perry earned the other cash from the 19 entries in the tournament).

This time around, the Stairway to Millions II will feature a 12-event schedule and start with an even lower buy-in point. The first tournament, to be held on September 8, will be a $400 buy-in event with unlimited reentries. Event #2 the next day is also a $400 tournament, but it goes upwards from there. By September 15, players will put up $2500 for Event #8 on the schedule, all on the way towards the $50,000 buy-in finale on September 19.

“The Venetian remains an incredible partner of PokerGO and the PokerGO Tour, and we are excited to expand our offering with the upcoming Stairway to Millions series,” PokerGO President Mori Eskandani said during the announcement of the new tournament. “With a new twist that allows players finishing in the top three to skip a buy-in level, we’re looking to offer an even greater opportunity for players to progress up the stakes and compete at the highest levels.”

“Bringing our players new and exciting experiences is one of our top priorities,” said Tommy LaRosa, the tournament director for The Venetian Poker Room. “Having this one-of-a-kind PokerGO Stairway to Millions event for our players provides a unique opportunity for a player to ladder up from a small buy-in to a high roller tournament.”

Then Comes Poker Masters and the Super High Roller Bowl

As the Stairway to Millions II wraps up, the next two phases of the September of High Roller poker begin.

The Super High Roller Bowl VII then takes to the stage in Las Vegas. This has become a tradition amongst the elite poker players in the world, with the $300,000 buy in essentially limiting the event to only those with deep enough wallets or a vast amount of experience being able to earn a seat. October 5 will be the start of the 2022 Super High Roller Bowl, with the final table playing out on October 7.

“With Super High Roller VII taking place in the second half of the PGT season, we felt it was a great opportunity to pair it with the 2022 Poker Masters series to create a tremendous schedule of elite action,” Eskandani stated. “As the PGT moves closer towards crowning the greatest poker champion of the year and winner of the PGT Championship’s $500,000 prize, these are two events that you simply cannot miss whether you’re a high-stakes player or one of the millions of poker fans around the world.”

It promises to be an excellent month of poker, and it will all stream on PokerGO beginning on September 8. If you have not yet taken advantage, head to PokerGO.com to sign up for a subscription. If you are a Sling TV or You Tube TV user, then it is included as a part of their extended sports package, so search your listings.