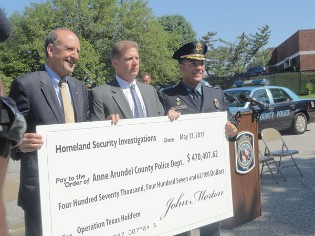 Remember that scene in the movie Rounders when Mike McDermott cleans up at the Binghamton police officers’ poker game (until Worm comes along and ruins everything)?  Well, if you live in Maryland and lost money when the United States federal government indicted two online gambling companies in May, seizing ten domain names along with player funds, playing in a local law enforcement game might be the only way for you to get your cash back.

As reported by the Odenton Patch, the Anne Arundel County Police Department was awarded $470,407.62 by the U.S. Immigration and Customs Enforcement’s (ICE) Homeland Security Investigations (HSI) division, all of which was seized from as many as eleven bank accounts associated with ThrillX Systems and K23 Group Financial Services, the two online gambling companies which were indicted.  These accounts held player funds on deposit at sites such as TruePoker.com, DoylesRoom.com, and betED.com.

From late 2009 through mid-2011, ICE HSI ran an undercover operation in which it operated a fake online payment processing company in order to catch online gambling companies transmitting money to and from the United States.  The ICE-run payment processor, named Linwood Payment Solutions, processed over 300,000 transactions totaling over $33 million between December 2009 and January 2011, all for the two companies named in the indictment.

Those companies, along with three individuals associated with them, were charged with money laundering and operating a gambling business.

As is the norm for government and law enforcement officials who are against online gambling, ICE used unfounded notions to support the indictments and seizures.  In a press release issued when the indictments were returned in May, William Winter, Special Agent in Charge of ICE HSI in Baltimore said, “The proceeds from illegal Internet gambling are often used to fuel organized crime and support criminal activity. ICE HSI will work diligently to uncover illicit transactions involving these types of financial crimes. Together, with our law enforcement partners, we will disrupt and dismantle organizations that commit these crimes, regardless of their location, whether here in the United States or abroad.”

As it turns out, the almost half-million dollar “donation” was the largest ever for the Anne Arundel County Police Department.  The department has said the money will go towards new weapons, vehicles, and equipment for undercover operations.

“Especially in these tough economic times, when I’ve had to make very unpleasant budget cuts, I’m pleased to see these revenues will come to the police department to help them out and help them do their job,” said Anne Arundel County Executive John Leopold.

In related news, eGaming Review reported last week that David Parchomchuk, one of the men associated with ThrillX Systems and named in the indictment, claims to have not been involved at all in any online gambling operations.  He is not an owner or founder of the company, as some news sources reported, but just a software programmer.  “His name is not, and has never been, on any company share certificates, registry, domain, or anything else related to betED, ThrillX, OneUpNetworks, or any other associated companies,” his representatives said.

“I had no reason to believe that I would be indicted for providing technical services to this company,” Parchomchuk said through a representative. “As a husband and father I would not have jeopardized my livelihood, or the security of my family.”