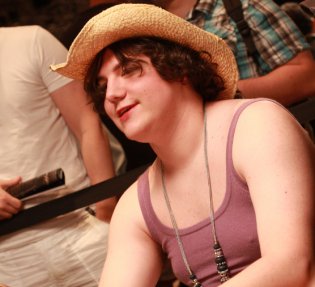 Whether for charity or not, male poker players Shaun Deeb and David “Blue Knight1” Sesso were among the entrants for the $1,000 Ladies No Limit Hold’em Championship at the 2010 World Series of Poker (WSOP). However, their involvement caused quite a stir across the poker world as Event #22 kicked off.

Among those Tweeting about the involvement of several male players in the Ladies only event was UB.com pro Adam “Roothlus” Levy, who remarked, “I love how all the ladies get so done up for the ladies event, but no one looks as good as @ShaunDeeb.” Also painting a picture of the scene for those not camped out at the Rio All-Suite Hotel and Casino in Las Vegas was former “Poker2Nite” host Joe Sebok: “In the main poker pavilion at WSOP. Man, these ladies realllllly hate the dudes that played the event.”

Also weighing in was PokerStars sponsored pro Maria “Maridu” Mayrinck, who commented via her Twitter feed on Friday, “I see 6 guys playing the ladies event. I don’t mind too much, won’t make me play different, but the ladies are very upset.” Elsewhere in the Las Vegas casino, Absolute Poker sponsored pro Trishelle Cannatella noted, “They just made an announcement at #WSOP apologizing for the guys playing in the ladies event. One guy has full on drag. Amazing.”

Deeb is one of the top tournament pros in the game, although he announced his retirement earlier this year. However, he turned out in full on drag to the $1,000 Ladies No Limit Hold’em Championship purportedly in the name of charity. Deeb’s Twitter feed asserted, “Playing the ladies event. Liv [Boeree] dressed me and gave me makeup. New Photoshop thread will form from these photos.” Deeb was sent packing just before the dinner break much to the delight of the women in attendance after his A-J could not draw out on Niago Wilson’s wired pair of nines. Deeb gave $100 to Wilson as a bounty and exited the field.

Two males outlasted Deeb in the field. Coverage found on WSOP.com noted, “After competing a completely unscientific survey of the field, it looks as though we are down to our last two male entrants. The field has been erupting in applause whenever a male is sent to the rail. We’ll let you know when the last cheer arrives.”

Not everyone was perturbed at seeing men enter the event. UB.com pro and reigning National Heads-Up Poker Championship winner Annie Duke told Poker News Daily, “I get that women would be upset, but I think it’s important for men to take that stand and also it’s for charity. It’s also making a point that poker is not like tennis. Men are not mentally stronger than we are, so it makes no sense to separate it out. If there were a men’s only event, people would be encouraging women to play.”

Early on Friday night, CardPlayer reported that one-year or lifetime bans from the WSOP may be in store for Deeb, Sesso, and other males to entered the Ladies event. When asked when the media could expect word of any sanctions, WSOP Communications Director Seth Palansky told Poker News Daily, “You can report on them when they occur.” He added, “People aren’t respecting our tournaments. We have the ability to handle things any way we see fit as tournament operators.”

Among those still in the hunt for the bracelet in Event #22 at the time of writing are Poker News Daily Guest Columnist Linda Johnson, Bodog pro Evelyn Ng, and UB.com front woman Liv Boeree. First place will pay out $192,000.