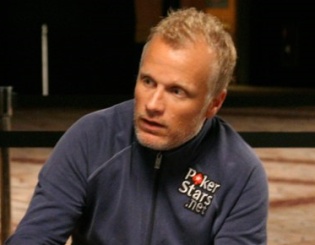 Danish news magazine Ekstra Bladet (ekstrabladet.dk) has reported that popular Danish poker pro Theo Jorgensen was shot in a home robbery Sunday night. He is in stable condition in the hospital, fortunately only shot in the leg.

The attack occurred at about 10:00pm Sunday, December 2nd, as three men forced their way into Jorgensen’s home in the Greve municipality, about 21 kilometers southwest of Copenhagen. Jorgensen and his wife were just relaxing at the time, as most couples tend to do late on a Sunday night. The men, wearing elephant masks, shot the poker pro three times in the leg.

Obviously not wanting the terror to escalate, Jorgensen and/or his wife directed the English-speaking intruders to the money they had on the premises, reportedly in the five-figure kroner range. Mrs. Jorgensen called the police (presumably once the attackers had fled the scene), who searched the property with dogs.

Nobody has been apprehended yet. All three suspects were male, all believed to be about 170-180 cm (about 5.5-6 feet) tall with standard builds for their height. One was wearing a dark gray jacket, gray pants, and light colored shoes and carried a white bag with some sort of “bar” on it. The second attacker wore a gray hooded jacket and dark pants, while the third wore a gray jacket, light gray pants, and white shoes and may have been carrying a submachine gun.

As shocking as this incident was, it was not likely something that was completely unexpected to Jorgensen. Almost exactly two years ago, Jorgensen may have foreshadowed the attack, writing in his PokerStars blog:

A big negative which hit home last week is this: I assume a much greater risk of bumping into robbers. My chances of that are considerably bigger than my neighbor who works in Silvan. It as a fact driven home when that friend was robbed in his home for 2,000 Danish Kroner.

It’s a very unpleasant thing to worry about, when you are gone a lot and the girlfriend is home alone with two children. There’s not so much I can do about it, except what I’ve already done. I’ve installed lots of lights and alarms, but potential robbers aren’t aware of that before they break in. There is nothing in the house worth stealing. I don’t have any cash in the house. Why should I?

I sincerely hope that my family will be spared of a home robbery, and that the robbers only come when I’m home alone. Then they’ll get the 800(Danish Kroner) I have in my pocket. My girlfriend has even less on her. So if you meet those boys, please pass it along…

UPDATE: Jorgensen made a brief statement on his Facebook page Monday. It reads (translated from Danish):

It is important to me to emphasize that I am a careful man. I was prepared mentally and practically that this situation could happen, to protect myself and my family against people from the outside. I know that people can have a misconception about how much cash I have in my home. I have alarms, always as little cash as possible and generally take my precautions. Unfortunately, that was not enough.

Under the circumstances I am fine and want to focus on taking care of my family so we can get through this.