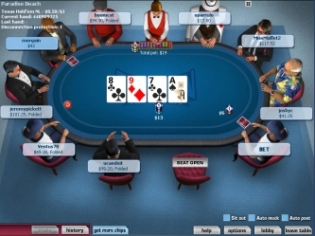 Last week, PartyPoker announced that it was eliminating all multi-table tournament fees for the summer.  Now, perhaps in response to its closest competitor’s price slashing, Titan Poker, the most recognizable member of the iPoker Network, has announced that it is reducing or completely removing the rake from many cash game tables.

Titan Poker calls the promotion “Rake Break,” and has not set an end date for the discounted cash games.  It does say, however, that the poker room “reserves the right to amend or cancel this promotion at any given time.”  Not every table will see the benefits of Rake Break, so keep that in mind when you sit down at the tables.  The specially marked Rake Break tables will be found in the following games and limits, but only at short-handed and heads-up tables:

Again, the rake discounts are only available at specially marked tables, none of which will be full ring.  Additionally, no table that has disconnect protection will be eligible for the Rake Break promotion.

The standard rake structure on the iPoker Network for the applicable tables is as follows:

With the fall of Full Tilt Poker, the iPoker Network currently ranks third in the industry in terms of average cash games players over the last seven days, according to PokerScout.com.  With 4,300 cash games players, it is not far behind PartyPoker’s 5,000 players.  They are both way behind PokerStars, which is averaging 23,400 cash games players.  Other poker rooms on the iPoker network include Chili Poker, Sun Poker, William Hill Poker, BetFred, and Paddy Power Poker.