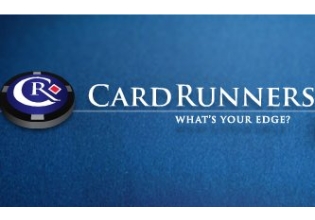 Heading into the final table of the 2010 World Series of Poker (WSOP) Main Event, one of the overarching questions was what logos would be featured. With seven members of the final table representing Full Tilt Poker, four needed to be re-patched before play could begin. On Saturday morning, just minutes before the resumption of the final table, the poker world learned that CardRunners logos would take center stage.

Filippo Candio was spotted this morning with a blue and black scarf combing the halls of the Rio taking pictures with fans. Meanwhile, John Racener wore a CardRunners logo, the popular poker training site associated with Full Tilt Poker. Racener also donned a GetFein.com patch as well as a Poker Players Alliance (PPA) logo. John Dolan, Mizrachi, and Joseph Cheong are wearing the logos for Full Tilt. All three are virtually seated next to each other. Meanwhile, Soi Nguyen is wearing a “Poker After Dark” patch.

Speaking of the PPA, Membership Director Bryan Spadaro was giving out PPA patches to every member of the November Nine. Spadaro told Poker News Daily in the lobby right before the flood gates opened, “It’s a pretty different situation this year in that only two sites are represented and they both support the PPA. I talked with each player and it’s not a hard sell.” PokerStars and Full Tilt were the only two online poker rooms to send players to the final table.

“PBJaxx Crew” patches were being passed out in earnest as supporters of Jason Senti assembled in the lobby in front of the theater. The group included longtime poker blogger Nat Arem and other online poker staples. Additional players spotted in the early going included WSOP Player of the Year contender Frank Kassela and Carter “ckingusc” King.

The spectator line opened shortly after 11:00am here in Las Vegas and at the head of the pack was Mike Fournier, who hails from Canada and will be rooting for Matt Jarvis. Fournier told Poker News Daily why he’s in Camp Jarvis: “He’s a great player and he’s good for the game.” Fournier was 17th in the spectator line last year and showed up at 4:15am this morning to claim his spot at the front. Fournier, like Jarvis, supported Full Tilt Poker and wore a shirt with the logo of the world’s second largest online poker site.

Inside the theater, Tuesday’s episode of the WSOP Main Event final table is airing. The Jack Link’s Beef Jerky Wild Card Hand just aired and fans are filing in. Poker News Daily is sitting in the orchestra level VIP area next to representatives from CardPlayer and ESPN, including Bernard Lee, Andrew Feldman, Lance Bradley, and Jessica Welman.

UFC promoter Bruce Buffer will handle the “Shuffle up and deal” promotions this afternoon and players will enter the Penn and Teller Theater to their own intro music in what promises to be quite a spectacle. Here’s a list of music that was selected:

Stay tuned all day for the latest from the November Nine.