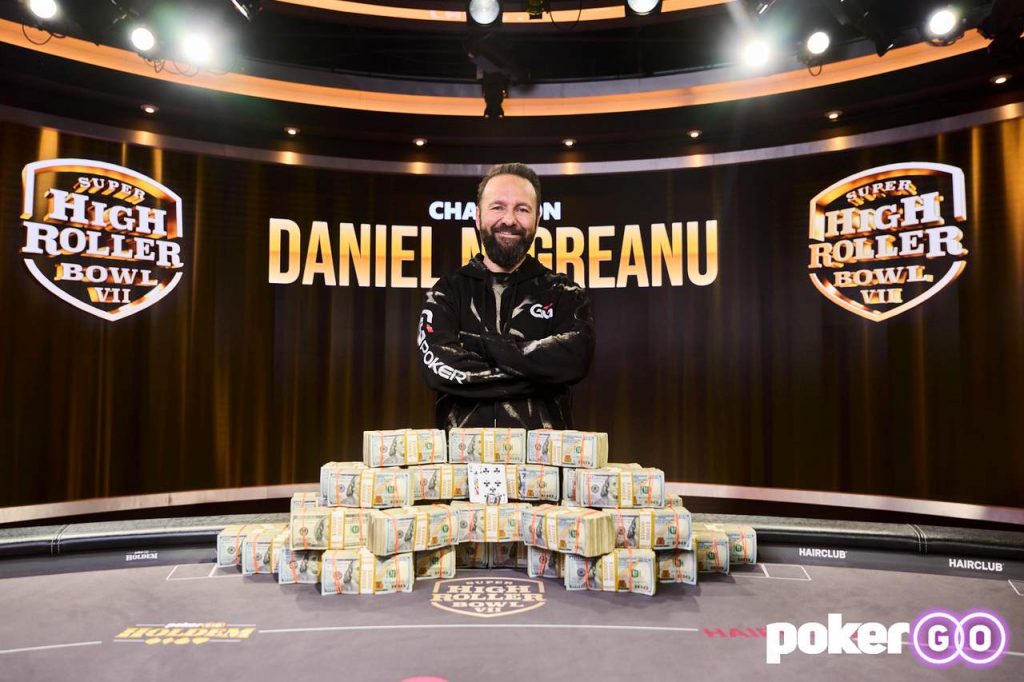 It has been a year of discontent for Daniel Negreanu. Sure, he had won more than a million dollars prior to the 2022 Super High Roller Bowl, but he had shot through that during the 2022 World Series of Poker by itself. Thus, Friday night was an enjoyable way for Negreanu to get the monkey off his back – by winning the Super High Roller Bowl’s $300,000 buy in event for a $3 million-plus payday.

Negreanu ended Day One of the SHRB at the top of the standings and, after Day Two on Thursday, he only trailed Nick Petrangelo in the standings. They were the only two men who had chip stacks of seven figures when the five men sat down for action in the PokerGO Studios in Las Vegas on Friday. Andrew Lichtenberger (880K), Orpen Kisacikoglu (855K), and Justin Bonomo (610K) were all going to have to work hard to reach Negreanu (2.225 million) or Petrangelo (2.63 million), so it was conservative to say that either Nick Petrangelo or Daniel Negreanu was going to win the tournament.

Something else was also at stake for these five men. Only four places would pay in the 2022 SHRB, meaning that one of these guys was going to have nothing to show for their two days of labor. It was thought that Bonomo would be that person, as he was the shortest stack at the table, but it would be a clash elsewhere that brought about the bubble elimination.

Lichtenberger would open the betting from under the gun and got a call from Negreanu in the cutoff. This was enough for Kisacikoglu, in the big blind, to commit the remainder of his chips to the center of the table. Lichtenberger decided to make the call and, as Negreanu got out of the way, the cards went to their back:

Needing only to dodge an Ace or any strange running cards, Lichtenberger saw his Ladies hold up and Kisacikoglu was out of the event in fifth place ($0).

Negreanu Goes on the Offensive

With everyone now guaranteed a $720,000 payday, the table began to get a bit more aggressive. Bonomo was the next out the door, courtesy of Lichtenberger, as he was coolered by Lichtenberger’s pocket Jacks against his pocket eights. To make matters even worse, Lichtenberger even hit a Jack on the turn, ending any sweat for Bonomo as he headed to the cage to retrieve his $720,000.

The three men left – Petrangelo, Negreanu, and Lichtenberger – were all tightly packed. Petrangelo had the lead with his 2.965 million in chips, but Negreanu and Lichtenberger were neck-and-neck with 2.12 million and 2.115 million, respectively. The tournament would hinge on the next knockout in the event – and who would get it. The battle raged deep into the afternoon before the logjam broke.

The penultimate battle came down between Negreanu and Lichtenberger. Lichtenberger would commit his final chips with a K-6, only to see Negreanu out pip him with an A-6. The drama ended quickly, with an Ace on the flop, and once no running Kings came on the turn and river, Lichtenberger was out of the tournament and Negreanu had a monstrous chip lead.

How monstrous? Going into the heads-up fight, Negreanu sat atop a mountain of 5.915 million chips to Petrangelo’s 1.285 million. Petrangelo would valiantly try to fight off the felt, even earning a double at one point, but in the end Negreanu’s lead was just too much to overcome. On the final hand, Negreanu moved all in with a Q-7 and Petrangelo called with the edge in his K-5. A seven on the flop switched the lead over to Negreanu and, once the board failed to provide any magic for Petrangelo, he was out in second place and Negreanu captured the 2022 Super High Roller Bowl.

(Orpen Kisacikoglu finished fifth, but outside the money)

With the win, Negreanu’s bankroll not only gets a much-needed boost, but Negreanu also gets another reward. The points earned from this tournament pushed him into 21st place on the PokerGO Tour leaderboard. If Negreanu can maintain that position, or perhaps move up a few more rungs on the ladder, he would be eligible for the season-ending PokerGO Tour Championship. That is a “winner-take-all” tournament that will pay out $500,000 – and you cannot win it if you’re not in it!